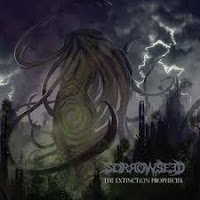 Though I certainly get a fair share of local music passing my desk, it's rare that I hear something quite so painstakingly crafted as the 2CD debut album of Western Massachusetts' Sorrowseed, a group that establishes a missing link between Cradle of Filth's extreme Goth metal inclinations and the lush paradigms of mid 90s female fronted fare via Theater of Tragedy or The Gathering. Granted, such a fusion of aesthetics might not find a wide appeal beyond those enamored of such artists; but The Extinction Prophecies manages to glue such poles together into a cohesive, Lovecraftian landscape of haunting myths and harrowing, calm interludes distributed through a lattice of glazed guitar melodies, ambiance, pianos and outbursts of impish menace that dwell somewhere in the theoretical overlap of Velvet Darkness They Fear and Midian.

Sorrowseed has woven its endtime epic in two halves, the first being the Dread Sylvan Summonings and the second the Descent of the Scarab Prophet. Each occupies its own CD, and while the content is somewhat interchangeable in terms of overall mood, there are some notable differences between the two, largely in the vocals. Dread Sylvan Summonings features calmer and more eerie compositions, favoring a mix of female vocalists: Lilith Astaroth handling the Dani Filth-like blackened rasp and shrieks, and 'The Reaping Willow' Bonnie Miller covering the clean tones that are reminiscent of The Gathering's Anneke van Giersbergen via Mandylion. While I haven't in general fancied such a blend in a decade or more, I'll admit that Sorrowseed pulls it off due to the ghostlike fabrication of the writing. As for the second disc, Descent of the Scarab Prophet, the band turn towards their other vocalist, Casey Jones, who uses a guttural style not unlike Vader or other Polish death acts, and is backed by more of the rasping. It's a curious concept, and not one I've really seen attempted to this extent, but in a strange way, it actually does better distinguish each of the discs.

Musically, I found myself more inclined towards the latter, especially when the mysticism hits a crescendo of swelling components, the growl and rasped vocals flowing in conjunction over the solid guitars and creepy synthesizers in "Circle of False Gods" or the finale "Astral Harvest" which has a hint of Gothic, progressive extremity to it. The riffing side of the band is extracted more fully here, but that said I would have liked to hear the power of the guitars a bit more than I do. The almost constant use of the pianos and synthesizers is not a problem for me, but I do feel that they were a little loud in some sequences. With the Dread Sylvan Summonings tracks, I actually did feel that there was some more punch to the riffs, but this is possibly due to their contrast against the cleaner vocals, the rasping and the more Gothic focused songs like "Flowers to the Furnace", "Demeter's Reckoning" or "Willow's Edge".

I can't claim that the songs across both discs are incredibly distinct or catchy, but they flow very well as the saga proceeds through its roughly 90 minutes of desolation and despair. Aside from a few of the aforementioned volume levels, which are but minor irritations, the production is quite good. Special credit must also be given for the lyrics and packaging here. The former are incredibly poetic and resonant, saturated with the appropriate dire imagery, but never cheap or shallow; some of the best I've read of late. The latter (artwork) is great for an unsigned band: a spiraling Elder God trampling a storming cityscape, with a nice lyric booklet included inside the digipak. It's also of note that the band is a sort of Gothic metal collective, with the guitarist and composer Morte McAdaver at its center, and a rotation of core, live and guest members. That such a symposium, with such varied constituents remains so 'together' is a testament to their potential.

Sorrowseed might still be a project in its infancy, 'lurking at the threshold' of its promise, but the ambition and professionalism here are laudable. Metal fans who don't wince at my earlier comparisons, or appreciate Gothic/extreme metal hybrids like Graveworm, Crematory and Therion might find much to enjoy here.