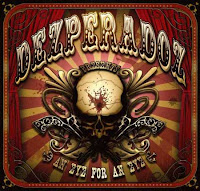 If there's one thing An Eye for An Eye does to justify its existence above the Dezperadoz sophomore The Legend and the Truth, its that it noticeable turns up the heavy elements that were in short and almost no supply there. They spend very little time wasting away on the high plains before kicking back their whiskey and getting down to business, and while the Ian Astbury gone Alice in Chains vocals are still not as effective as Angelripper was on the first album, I feel like they're formed into more exciting, potent choruses here than I found on the predecessor. That's not to say this is some tour de force Western comeback here, it's another average outing with a few catchy moments and nothing more, but I feel like it somewhat better satisfies my desire for a truly gripping Wild West cowboy metal record, since bands like Hellyeah seem incapable of giving the theme its due.

Like I said, no time is wasted, and after the expected theatrical 'setup' of the title track/intro, they rage right into a chugging, forceful power/thrash tune just called "Hate". The chorus in this song is pretty good, but most of the lyrics are sadly retarded, especially the opening clip, and it feels muddled at best. "Days of Thunder" is much less insulting, with a more dramatic drifter atmosphere to it carried through the clean guitars and wide open chords. This is actually one of the best songs on the entire album, and I liked how the verse vocals cut down to a mid ranged along the wacky, effected bass-lines. "Wild Bunch" and "Wild Times" are both very similar to the first two metal tracks, with "Wild Times" being closer to "Days of Thunder" and thus better, enveloped in some grooving guitars. The covers of The Doors' "Riders on the Storm" and Johnny Cash' "25 Minutes to Go" are quite weak, the latter going as far as idiotic, but there are a few more originals like "May Heaven Strike Me Down" and the more sultry "Give Up" which do their job admirably enough to give at least a passing listen.

Basically, just wedge this album between The Dawn of Dying and The Legend of the Truth and you'll get an accurate picture of its quality. Accessible, country fried hard rock with hints of heavy, power and thrash metal that never amount to more than a mid-paced chugging onslaught also reminiscent of 90s, groove oriented grunge bands. Kraft's vocals are skilled and clean enough, though derived from better known acts like The Cult, Stone Temple Pilots and of course AiC, and the stupidity here is kept to a minimum (turning up in perhaps 3-4 of the total tracks). If you want a better Western metal album, grab the debut, but even though this feels a little less produced than the sophomore, it has a bigger pair of balls to kick in with your spurs. Still waiting on a genius Western metal album, like a Red Dead Redemption or Unforgiven proof positive that new life can be spat into the old genre, and at this point I'm doubting that Kraft's Dezperadoz are going to deliver it, but this isn't completely sucking the tap at the saloon.