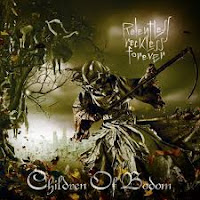 I don't know about anyone else, but I've almost always found the music of Finland's chosen ones Children of Bodom to be like a brief bout with drunkenness. You feel elated, almost euphoric and dizzy when first confronted with their musical prowess, but all too quickly you've come down from the cloud. Most of their albums simply have not lasted me more than an hour or two of initial enjoyment. It's the melodic death metal equivalent to Ecstasy, just not as powerful or life changing as, you know, real hard drugs. That said, there have been some exceptions in their catalog. I enjoyed and still enjoy a few tunes from 2000's Follow the Reaper, and their previous album, Blooddrunk, was a nice surprise, the Wild Child and his companions seeming to tune out a fraction of their spastic composition to write a record with some atmosphere.

Relentless Reckless Forever more or less follows this same trail, but there are definitely a few stretches in the album which drag me towards disinterest. For example, I really don't enjoy Alexi Laiho's vocals for more than a few minutes. They remain brash fits of Tomas Lindberg worship that still feel like tortured teenagers, despite his evident maturation in writing and performance. It's not that they don't fit the music, but I almost wish that some of the riffs the band writes, which are often pretty damned good, were helmed by a more poignant presence. Then there is the wanking, the flurries of guitar and keyboard leads that stretch off into nowhere but self indulgence and impressing the more gullible elements in their audience who seek flair over substance. Last, but not least, the band holds on to this strange 'tough guy' album that they glossed up on records like "Hate Crew Deathroll" and "Are You Dead Yet?". We've got songs here like "Shovel Knockout", "Northpole Throwdown", and "Pussyfoot Miss Suicide" that sound like bad signature wrestling moves.

Brushing all of this aside is not easy here, because the elements do occasionally interfere with the content of this album, but otherwise it's a fairly solid and engaging listen. I especially like the distinct precision they create with a lot of their riffing. For example, the interaction of the bass and flighty, taut melodies that inaugurate "Shovel Knockout", and then explode into a circular vortex of speeding insanity. As forced and testosterone driven as such a burst feels, there is some great music in there, and when they break out the chorus with Warmin's keys, it erupts into the same passion I enjoy in other Finnish melodeath like Kalmah or Norther. "Cry of the Nihilist" and "Ugly" are two more riff-tastic tracks I would point out, and I also enjoyed the more accessible, poppy prog/metal veneer of "Roundtrip to Hell and Back". Then there are a few cuts I thought were mixed bags, like "Pussyfoot Miss Suicide" which trips over itself with, in my opinion, a few too many things happening, or "Relentless Reckless Forever" itself, which has 1-2 reusable parts in an otherwise forgettable chassis.

Overall, didn't care for this quite so much as its predecessor, which surprised the hell out of me despite the divisive reactions, but I would still say that Relentless Reckless Forever is good fun for those seeking to shut off their mind and dabble in the tempest of youthful energy. Children of Bodom are no longer children, but they still perform with that implied attention span, and there is really not a lot to this that will remain durable in the months to come, but there was obviously a good deal of effort put into this and some noteworthy riffs that, with better vocals and overall construction could certainly be considered brilliant. Obviously the hardcore fans of all things Bodom, who wouldn't care if the band recorded themselves chewing crackers for an hour at high speeds, will find much to praise here, but for the rest of us, there's a passing semblance of entertainment.