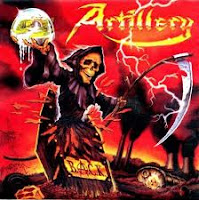 Artillery had on and off felt like a case of unfinished business. How could a group of human beings conjure the magnificence of By Inheritance and then drift into nothingness? So when it was clear they were reforming at the close of the 90s, my eyes lit up with both anticipation and dread. The decade had twisted so many legendary thrash artists in the wrong direction. So much could have gone wrong. We might have been forced to suffer Flemming Rönsdorf nu-metal, or worse. This was not a complete reunion from the 1990 lineup. The Stützer's and Rönsdorf return, with Morten taking up his earlier instrument (bass) for the recording, and the trio enlisted the qualified drummer Per Jensen (Invocator, The Haunted, etc) to lay down the percussion.

It turns out we never had much cause for concern. Artillery positioned themselves straight back to their brand of exciting, uplifting thrash metal, with a few modern flourishes. First, the guitar tone is much thicker, with the rhythms packed just as strongly as the leads and harmony. B.A.C.K. is not as airy and grandiose as By Inheritance. You don't feel like you're in that same majestic, bewildering space. They also channel a lot more effects into the guitars, and the riffs are an inkling less complex and well defined than their predecessors. The bass is thicker in the mix, but it generally serves as an afterthought. Perhaps this comes with Morten's 6-string focus; though he was previously the bassist for the first two albums, he might have just plunked these lines down in the wake of Thorslund not being available (or anyone else). There are exceptions, like the rock-oriented "Final Show" which has decent fills. As for Flemming, he's just as charming as ever, but not as loud through the mix as the older material (in tune with the times), and often a bit strained.

This album is not nearly as thorough as By Inheritance. It opens with its two most energetic and entertaining tracks, and then drops off slightly in quality. "Cybermind" is intense, with its trademark, amazingly well conceived riffs and structural swerves, a massive thrashing groove carved into its verse, and a great lead sequence. "How Do You Feel" cuts from the very same cloth, an obsessive charge forward into riffs that would not have been out of place on their 1990 opus, and this is perhaps my single favorite track on this album. The verse guitars are fucking amazing here, and the thicker tone really drives it home. Then comes the third track in the 'Trash' trilogy, "Out of the Trash", funky melodies and bass-lines alternating with straight thrash not unlike the first two songs, and not ultimately as memorable. "Final Show" has a lot more hard rock grooves to it, with the aforementioned funky bass-lines, and this did very little for me.

But before they let the attention span of the album drift off, they belt out "WWW" and "Violent Breed", which both have a few great riffs spread about them, even if the vocals are excessively corny (especially the stop/start thrash bridge lines in the latter). "Theatrical Exposure", "The Cure" and "B.A.C.K." return to the pacing of "Cybermind" and "How Do You Feel", with only a few irritating vocal lines between them; and the closer "Paparazzi" is also worthwhile, curving into some huge, slower hooks, though once again it feels as if he's stretching his pipes a bit too far and might need a cup of hot lemon tea.

Obviously, anyone expecting an album at the level of By Inheritance would be mildly letdown here, including myself, but it's not a disappointment of The Phantom Menace proportions (which came out the same year). To be honest, you can get a lot of mileage out of "Cybermind" and "How Do You Feel" alone, which stand among the best songs Artillery have ever written, and a handful of others here follow straight in their footsteps. The only tracks I really don't care for in the long run were "Final Show" and "Out of the Trash"; they mar the overall effectiveness of the track list, but it's not as if they're entirely void of ear candy. Considering what a dry year 1999 was for this genre (only Sodom and a few black/thrash acts like Witchery and Necrodeath had released anything worthwhile), it serves as a shining if flawed comeback album with some legs to stand on. Alas, in another, frustrating turn of events, the Danes would disassemble once more in 2000.