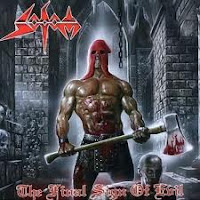 Not to be outdone by their fellows Destruction, Germans Sodom also decided that 2007 was the right time to rehash and re-release some of their raw, early material to both their younger audience and original fans. However, there are some clear distinctions between The Final Sign of Evil and Thrash Anthems. Where Schmier and company merely wanted to basque some of their earlier glories in the fresh studio sound of the current age, Sodom had a more serious intention, to give the In the Sign of Evil EP the full-length release it was originally intended for. As a result, the majority of the tracks recorded for this were never released before, so most are hearing them for the first time with the new incarnations of the EP material.

Sadly, not many of these tracks are that great, so I can sort of understand why they might have been left out in the first place. "The Sin of Sodom" is a Slayer-like piece with average riffing circa Hell Awaits. "Bloody Corpse" is slower, plodding, and not so potent. "Where Angels Die" begins like a death march, then pummels forward into some less than explosive, faster riffs and shoddy drums. "Ashes to Ashes" is probably the crappiest, with some generic riffs that were predictable even by the early 80s. "Defloration" also carries the burden of little enthusiasm, though some of the guitars feel blistering and fresh. No, the only real survivors here are the bruising "Hatred of the Gods", and the vulgar and raw "Sons of Hell", neither of which is a stylistic departure from the rest, but the components of loud bass, solid punk/thrash riffs and Tom's return to the blacker, rasped vocals all seem to come together to create a rough charm.

Naturally, the In the Sign of Evil songs fare better, because they are simply better songs, and these versions are pretty fun. Sodom have not pulled a Thrash Anthems here. This shit is incredibly rugged and violent, not made to burst out of your speakers, but made to frighten your mom and pop just like they did 30 years ago. "Blasphemer" cruises along, ever the alternative to Slayer's "Chemical Warfare", while "Witching Metal" and "Burst Command 'Til War" are just as poseur crushing as they ever were. Likewise, "Outbreak of Evil" and "Sepulchral Voice" sound solid and spiteful.

In order to pull this off, Tom Angelripper united the original lineup of Grave Violator and Chris Witchhunter for the recording. This was apt to cause mixed reactions, because there can be no question that Bernd Kost and Markus Freiwald are technically more seasoned players. In fact, I'd almost be curious to hear what the same album might have sounded like with the current lineup of the band. However, as an act of loyalty its commendable. Those two were a part of this to begin with, and they remain so, and Angelripper doesn't want us to forget it. That said, the playing might seem a little sloppy here or there, which some will love, and some will loathe. It's pretty cool to have this at long last, but I'm not sure I'd bother with it were I not a fan who was interested in the history behind it. If you're accustomed to the more modern sounds of Sodom, M-16 or Code Red, or simply the Frank Blackfire records in the late 80s, then you might be taken aback by how uncouth it feels. If you're more enamored of the band's black/thrash mess roots, then feast away.