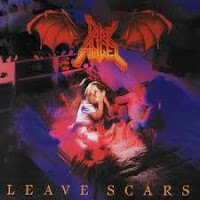 Though Darkness Descends was the audio incendiary equivalent of a wing of fighter jets attacking a hot dog stand (aka you, the listener), creating ripples throughout an underground starved for increasing extremity in metal music; the band experienced a period of unrest and a nearly 3-year gap before they could channel its followup. Bass player Rob Yahn and cult screamer Don Doty would exit the lineup, to be replaced respectively by Eric Gonzalez and tattooed man-beast Ron Rinehart, one of the last guys you'd probably want to meet in a dark alley or anywhere else you'd exchange interpersonal violence. Dark Angel had 'arrived' in its most enduring configuration, signed with Combat Records and given further exposure through their live performance on the Ultimate Revenge 2 compilation.

Rinehart is probably the most obvious difference between this album and Darkness Descends, with a more down to earth, shouted tone rifling through the myriad, verbose lyrics that Gene Hoglan drafted up for this album. Seriously, they scroll onward and onward, and not through mere repetition, but plausible, nightmarish revelations of the psycho and sadistic concepts being strewn over the instrumental violation. Let's just say Dark Angel had crafted one thorough epic of mental and musical distortion. The riffing is not unfamiliar to the previous album, but more complex still, almost as if you took other Californian thrashers Vio-Lence and ramped up the volatility levels of their 1988 classic Eternal Nightmare (especially "The Death of Innocence"). Yet, where that album provokes a fresh, bright brawl that leers at you from a street corner or a pile of junked automobiles, Leave Scars is more dark and personal, a Nightmare on Elm Street of technical thrash sans the shitty plot and acting. The stuff of broken homes and bedrooms. Drug addled depressions. Paranoid schizophrenia.

I've often complained about the production on this album, and its my least favorite aspect. Sure, it's workmanlike, fairly balanced and audible, but not entirely adequate for the level of riffs being wrought. As atmosphere, it functions like an overture to dementia, and you'll be so stunned by the constant hustle of the guitars and Gene Hoglan's storming, almost unparalleled battering that you are unlikely to notice so much. The album opens with a three hit onslaught, "The Death of Innocence" a symphony of fists beating an asylum wall before the grimy assailant that is "Never to Rise Again". Rinehart shines here, his vocals creating a manic percussion that perfectly flows astride the sore joints of the guitarists' digits. But as great a momentum as these tracks create, it is the stunning floor work of "No One Answers" and its incredibly evil opening riff that inform us that true greatness has occurred. The ensuing breakdown is one of the finest in all of metal history, with Slayer-like descending melodies that provide more than just a mosh pit, but a one way ticket to personal hell.

"Cauterization" is rather lengthy for an instrumental, and it might damned well have been given lyrics, but then the word count of Leave Scars would have likely surpassed the King James bible. However, the chugging, multi-tiered complex is convincing enough to level you straight in the face, before the unexpected deviation into a cover of Zeppelin's "Immigrant Song". Now, it arguably doesn't mesh well with its environment of psycho-sadistic emotional bombardments, but outside of a video with Viking cat stills set to the original, it's one of the most entertaining renditions I've heard, Rinehart proving he could scream just like Doty if he so chose. "Older Than Time Itself" is another favorite, its intro bearing a stark similarity to "For Whom the Bell Tolls", but the comparison ending there as dire melodies erupt and another intense, early breakdown sequence. "The Promise of Agony" is another classic, the bass pedal so condensed and percussive that it feels like there are 3-4 separate drum kits performing simultaneously in the studio; and neither do the freakish "Worms" 'narrated instrumental, nor the monstrous title track disappoint in the slightest.

Darkness Descends probably frightened a lot of people, and Leave Scars honored the tradition. It honestly would not get a lot more 'extreme' than this album in 80s thrash, without delving into the harrowing and inevitable mutations that were death and black. The combination of poignant, intelligent and violent imagery conjured through the lyrics is a tight fit with the labyrinthine, constant riffing. Despite its scale, there is no real excess here. Like Slayer, when this band wrote a breakdown, you could feel it, and while these aren't necessarily as potent as "Angel of Death" or "Raining Blood", they're both mighty and appropriate to offset the dominant, faster paced surge. The one hurdle I cannot get past is the production, it is simply not good enough for the writing, nor as resonant as Darkness Descends or the cleaner swansong Time Does Not Heal. But the songs themselves, barring the cover, are pregnant with hostility, riven with ideas and in the end I prefer it even to its highly lauded predecessor: it's marginally more interesting, with more consistently memorable riffs and psychological, multi perspective lyrics.