Destruction - The Curse of the Antichrist - Live in Agony (2009) 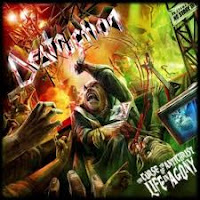 The Curse of the Antichrist is the third of Destruction's live efforts, but if you consider that Alive Devastation (2002) was only available to most of us an import (or through the Live Discharge DVD in 2004), it's only the second that was wildly available to audiences in Europe or North America. Similar to Sodom's One Night in Bangkok or Kreator's Live Kreation, there are two discs of material, running at about 100 minutes, and drawn from two separate performances, the 2007 Wacken Open Air set and a gig in Japan. Therefor, it does lack some of the flawed honesty of the Alive Devastation set; but let's not forget that the band's excellent 1989 Live Without Sense was culled from a number of gigs.

The material included here is pretty well divided between the band's classic 80s fare and their recent string of 21st century releases, possibly too much in favor of the later. From the most recent album, they include "Urge (The Greed of Gain)", "The Seven Deadly Sins" and the titular "D.E.V.O.L.U.T.I.O.N.", and from Inventor of Evil they've incorporated "Soul Collector" and "The Alliance of Hellhoundz", none of which are really essential in my opinion, but the selection makes sense as the band were heavily promoting these efforts at the time. The same could be said for "The Butcher Strikes Back" (All Hell Breaks Loose) and "Metal Discharge" (Metal Discharge), neither of which are great songs, but they of course include post-reunion favorites "Thrash 'Till Death" and "Nailed to the Cross" to compensate. In fact, they include "Thrash 'Till Death" twice, once from each performance, the difference being that the Wacken version has three drum kits storming off in tandem, which adds a truly warlike atmosphere to an already intense fucking song...especially when you consider that the added drums are being performed by Sven Vormann and Oliver Kaiser, the former Destruction members! Touching, no?

The rest of the set hearkens back to the classics most in the audience TRULY want to hear, like "Curse the Gods", "Mad Butcher", "Cracked Brain", "Eternal Ban", "Death Trap", Unconscious Ruins", "Life Without Sense", and "Antichrist", the last being pretty unexpected in the set, and also featuring the three drummer combo. I did feel like some of the material was pretty sloppy, in particular "Cracked Brain" and "Curse the Gods", and did not sound as strong as the band did as a trio on Alive Devastation, but there's still a pervasive, raw freshness which gets the blood stirring enough to listen through. I'd also note that some of the songs are cut down to an almost medley, and some might not appreciate certain riffs missing here or there. I know I didn't, but when you've got only so much time for a set, you do what you can to thrill the audience.

And they sound thrilled here, but ultimately I don't really care for this performance that much. It's cool to hear some of the newer songs I guess, but this in no way can trump the band's ultimate 1989 live offering with its vicious, original appeal. Destruction are a good act live, and one worth checking out if they ever come through your area, and I'd recommend you save the money you'd spend on this for at least most of one ticket's cost. If you can't attend, then track down Live Without Sense or the Live Discharge DVD. The sound and overall set list here is not the greatest, and it's not at all mandatory.