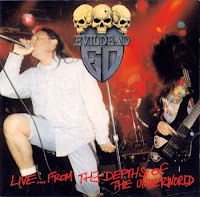 I'm not going to take a guess at why a band like Evildead would rate a live album after only two studio full-lengths, neither of which was all that impressive. Alas, the Californians were not the first case of such puzzlement and not the last. To their credit, though, they really make the best of it here with a solid mix of dense, thrashing guitars and bitter Phil Flores barking. This was all recorded in '92, the same year it was released as part of their Steamhammer deal, and it's never a bad thing to experience a performance of this style, a meaty fist plunged into the corpulent jowls of changing times. In fact, I'd go so far as to say that The Underworld material recorded in this set is superior sounding on stage than the studio.

There are nine tracks in total, eight of which we've heard from the studio full-lengths, one more ("Darkness") which was new to us. Surprisingly, the band have decided not to incorporate their Black Flag or Scorpions covers into the selection here. You figure they'd be live staples, popular with a less demanding audience. But no, these are all originals here, and they sound properly punishing. They include the intros to both albums, "Comshell 5" opening the proceedings, and then in an interesting twist, the "F.C.I." intro being used to herald "Welcome to Kuwait" from the sophomore, rather than it's normal slot preceding "The Awakening" on the debut. Otherwise, Live...from the Depths of the Underworld is culled fairly evenly from both Annihilation of Civilization and The Underworld. We've got "Gone Shooting", "Parracide" and the title track from the former, and "Global Warning", "The 'Hood" and also the title track of the latter.

My preference is definitely for "Annihilation of Civilization" and "Gone Shooting", which crush with the density of the later 80s Exodus stuff, but even tracks I did not care for so much from the second album are punctual and heart pounding here. The unreleased track, "Darkness" is comparable to The Underworld in style, straight hammering mid paced West Coast thrash, but aside from the cool chorus (a tribute to the film franchise that inspired the band's moniker) it's not all that great. I wouldn't call this a mandatory purchase unless you're incredibly enamored of the band's studio manifestations. It's not nearly on the level of Destruction's Live Without Sense, a crime of taste to live without, but it's certainly not a cock up by any means, and gives the appropriate impression that Evildead were no slouches on the stage.