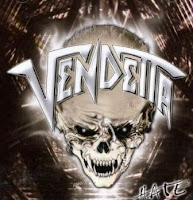 Had the world left enough room for another half dozen German thrash bands to flourish beyond the borders of their scene and their small, international fan base, Vendetta would undoubtedly have been one of those chosen. Their first two albums were excellent, and showed a clear, linear progression from rapid fire hostility to more accessible variation. Brain Damage itself might have been more successful, but not enough people were listening. I actually imagine, that had a third Vendetta full-length manifest with that same lineup in the early 90s, then we might have been witness to something special. As it stands, the band parted ways, and it would be nearly 20 years before it was reassembled with an almost completely new roster, and at long last, a new album...

Well, Hate is not the raging comeback we could have hoped for from this long ignored band, but it does have a number of positive qualities which render it tolerable. First, the mix is enormous, bright and powerful, especially the resonant echo given to the new vocals, and the guitars, which crush with rejuvenated clarity. However, the construction of the riffs is quite a bit simpler than on either of the 80s albums, and despite an honest effort in "Hannibal", "Guerilla" and "Rise for Revolution", there's not a lot to experience. Brain Damage had a lot of curious, extended bridge segments in its songs with some great writing, but only a few tunes here like "Mother" follow suite. Also, the lyrics and titles are pretty uninspired for the 21st century. I mean Hate? "Lying Society"? "Mother"? Come on. I'll cede that the last feels like a tribute to their '88 tune "War", but still, it doesn't seem like much gray matter was expended on the construction, like using the Martin Luther King Jr. sample to open "Rise for Revolution". Just a little too obvious.

The vocals definitely do not disappoint. Mario Vogel can slice straight through the riffs like a knife through Gnutella, and I enjoy how his vocals are echoed throughout the huge studio sound. Yeah, it's not Daxx Riggs, but its close enough, and a nice mix of Hetfield and Peavy Wagner (of Rage) in there. Otherwise, Hate is a bit cheesy, I won't lie. It's honest, straight up thrash, and it's tonal qualities certainly reflect an attempt to return to the Brain Damage era (much more so than their debut), but it simply doesn't possess the same complexity or staying power. A number of the other 2nd and 3rd tier German thrash acts have written a decent comeback by this point, but I'm sad to say that of this moment, I cannot count Vendetta among them.