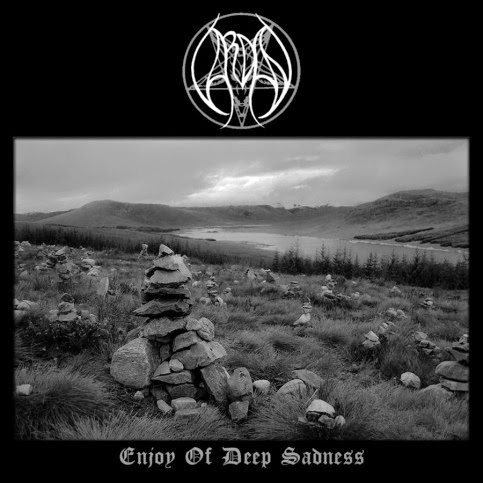 Vardan is a multi-instrumentalist from Italy who writes and plays in a number of projects, this eponymous one being his most storied and, I'm guessing, personal in nature. The one man or 'bedroom' black metal field instantly evokes the Burzum-inspired aesthetics of solitude, sorrow and obscurity, and just looking upon the cover image of this seventh full-length album, Enjoy of Deep Sadness, there can really be no question about what this is going to sound like. I'm not saying there aren't solo artists who have forged new territory from this very same point of influence, but in general this vector of approach has become increasingly effete and redundant to the degree that it's almost diluted the value of this medium as a whole, and Enjoy of Deep Sadness doesn't exactly make a strong case for its revival or redemption.

It's a simplistic, slow moving voyage here, with three tracks clocking in at over 11 minutes each, and only possessing the most subtle of variations. Some would probably dub this 'depressive death metal', with a thread of melodic doom coursing through the additional note choices being picked above the din of the darker, dreary rhythm guitar; with very little willingness to vary up the tempos or try his hand at composing anything more labyrinthine or complex. But those brighter, tear-splashed guitars are actually the one component of this album that held it above a deeper well of mediocrity, they do occasionally conjure up a hazy, efficient sense of meandering sadness that gives the listener the impression he or she is drifting across the bleak landmarks projected by the cover photo. They're not all equally memorable and effective, but their dreamlike, reflective quality actually distracted me from the fact that not much else is really happening anywhere on this disc. And I'm sure that's more or less Vardan's goal here, but I just feel that it's been done so many times, so much better than these three particular tracks...

The length also didn't help them much, since there's just not a lot of direction, no ebb and tide of emotional, more like a level plain of sadness. I appreciate that Vardan alternated a few cleaner, weird, wavering vocal lines in with the very ordinary black metal rasp he generally pronounces, but they're not exactly soaring or moving themselves. The drums here are really stripped down to steady, slow and minimalist beats with some timid hi hat work or occasional cymbal splashes, par for the course I suppose for this sort of writing, yet I wouldn't have minded more of a surge with some compelling fills to break up the pacing monotony. The bass lines work well enough within their limited, eerie grooves, and some of the cleaner guitar tones do add a creepy level to the fields of sameness (as in the middle, title track), but it's just never interesting enough on the whole. In the end, I can't be too hard on the record, since it's not 'bad'. It plays out like a slow blade across the wrist, while reveling in the greyness that it so desperately seeks to escape. Working as intended; I just intend to explore my personal suffering elsewhere. But some fans of Burzum, Nyktalgia, Cry of Silence and slower Dodsferd might disagree with me, so they should check it out.