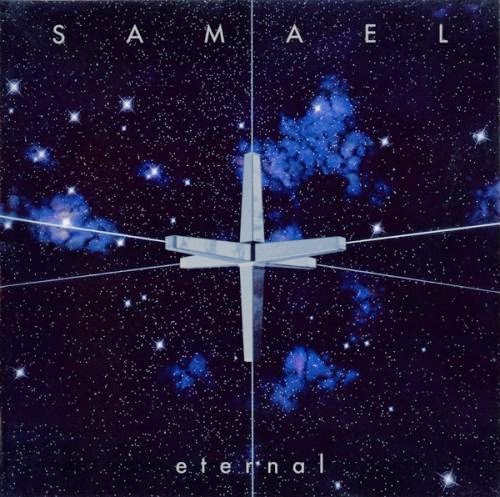 While Eternal is clearly a spiritual successor to Passage in terms of its spacey aesthetics, focused cover imagery and further progression towards electronics, it might also be viewed as one of the strangest evolutions in Swiss metal since the much maligned Cold Lake over a decade prior. It's unforgettable predecessor maintained a darker, frightening edge to it in spite of its fantastic riffing and general accessibility, but with this fifth full-length, Vorphalack, Xytras and company would go all happy on us. Pop some xstasy. In fact, it's generally better to think of this record as some sort of industrial universal space-dance music which just happens to retain a metal riffing and garbled, harsher vocal aesthetic than a proper metal recording (akin to The Kovenant's Animatronic without the corny Marilyn Manson band image), and absolute anathema for a chunk of the band's original audience who were stuck at Worship Him. 'No, fuck that man, this band lost it after the first rehearsal in 1987.' Ha!

But herein lies the catch. Despite Vorph's weird whispered and growled vocal lines through Eternal, which resemble pop and hip hop structures just as much as the gnarled, passionate black metal of his prior output...despite the increased importance of typified dance beats and synthesizer lines through which Xytras is attempting to bridge the classical and EBM fields....despite the fact that half the guitars on this album are merely low chugs or chords used to accent the beats...and despite the odd, raw production which would seem out of place for industrial/pop and was likely due to the band's novelty at blending these mediums, Eternal is a charming album. Yeah, it often feels like the band came up with the idea while enjoying a hot tub by starlight, in the Alps with some rich bankers' wives giggling over these artsy young studs they managed to wrangle, but there is this sentimental quality created through the contrast of choir synthesizers, reverberating electronic percussion, schmaltzy lounge organs/percussion (on a few tunes) and Vorph's 'Wait, we were recording that?', diabolic yet mouth-breathing presence that somehow transcends all the inherent flaws and musical faux-pas to produce something worthwhile...

Guitars. They're here, but divided into three camps. First: the aforementioned palm muting or syncopated chord phrases which are there to serve more or less in tandem with the other percussion (examples: the verses of "Ways" and "Us"), a technique you'd expect from a lot of industrial radio rock like Stabbing Westward or Rammstein. Second, and these are better, these floes of warmer and melodic chords, faster or slower, used to emotionally elevate many of the chorus vocals; they've got an alt rock feel to them, but definitely are one of the elements that were drafted forward from Passage. Lastly you've got a few living clever phrases like the creepy melody that comes into the verse in "Ailleurs" (or "The Cross"), and these are probably the most effective on the album, meaning I wish there were actually a few more. Missing are the brilliant, meticulous black/thrash progressions from the prior album, a blow that is felt by this listener, but in the end I can't rightly say that they would have worked with the overall feel and structure of the songwriting. Still, they hadn't voided the guitar as an instrument altogether, far from it, and the notes used here are at least more memorable than the two full-lengths to follow, even if their respective mixes put more emphasis on the riffs.

The synthesizers play an enormous role, largely through the choir pads which are used to give much of the album that cosmic, ethereal effect, like a seraph floating between planets with its glimmering sword out front. Probably a bit cliche, but Samael do them justice with simple but catchy patterns. In addition Xytras uses a lot of busier piano phrases which are amongst the most complex lines of notes on the album, and then they step even further outside with a mixture of 80s prog/New Age and cheesy techno-inspired sequences which occasionally sound like Tangerine Dream writing house music. It's all well and good for me, since I listen to a lot of that anyway, but others are just not going to be so welcoming of this stuff if their expectations were Blood Ceremony 2.0. They'll be even LESS welcoming of the weirder moments like in "Being" where the pianos get all saloon-bluesy with the goofy little electric guitar trills, or in "Radiant Star" where the organs make the intro feel like The Doors are about to stroll into a pastry shop on a Paris corner. I happen to love that song, the chorus is particularly timeless and emotional with Vorph's protracted growls, but it's pretty bizarre how they got from that point A to B and certainly was unique for 1999.

As for the beats, the more danceable nature of the writing definitely brings their artificial nature to the fore more so than Passage, an album that could have just as well been executed with a drummer, but lost no points for the slick programming. Usually they go big and industrial but there are a lot of subtleties here, electronic/pulse stuff hidden in both calmer moments and greater swells which does occasionally hover on glitch without the warping. Since they were at this time really into all the fire swinging cosmic carnival theatrics in their performances, there is definitely a bit of hippie drum circle aesthetic here, only it's represented electronically with some lighter percussion rather than the thundering of some tribal gathering. That said, when the band needs power, like the clashing accents to the chorus of "Together", they really come through, so despite the theoretical superiority this recording might have had with an actual human striking a kit, I don't have much of an issue that they chose to go this route again. Masmiseîm also sounds pretty electrified, with some bass lines that sound quite synthesized, but the simplistic grooves he metes out in tunes like "The Cross" are critical to contrast against that hovering nightscape of keyboard atmosphere.

Lastly, we come to the vocals, which are basically the whispers, semi-growls and rasps of the last album only seeming a little more laconic and poppy in their implementation. The guy's voice does have a hard time standing out against the more shining electronic aspects, and many could be forgiven for thinking the guy sounds absolutely goofy, but it's part of what gives the album it's sense of impossible charisma, since it runs contrary to most of what people love about a good pop or EBM band...a strong singer with an 80s penchant for choral melodies that engrave a tune into memory. Vorph's performance IS memorable, but incredibly flawed all the same, which was either a brilliant or stupid move depending on who you ask. A lot of the meters and ideas seem half-formed, but it is nice that he'll occasionally lay out a larger growl for balance. Lyrically, though, this further emphasis towards spiritual exploration and personal meanings, far removed from the evil occultism on their old material is a bit of a shock. The song titles are incredibly, efficiently Zen and the lyrics almost constantly attempt to uplift the listener with traces of Eastern mysticism and pacifistic enlightenment. It's almost as if they had a Darjeeling Limited moment somewhere between 1996-1998 when they were thinking how they'd follow up their masterpiece.

And that's about the best I can do, good readers. It's a unique album for sure, but one of those 'I'll allow you this one' deals for me, where I admired the band's transformation but wouldn't necessarily want to hear them try this again (which they sort of did, sadly). The first track "Year Zero" is pretty representative of the sound of the whole album, but it's actually the least interesting/memorable so I question its front placement when everything else is so much bloody catchier. That aside, I really liked the album. It's touching and heartfelt and all those sorts of things a Samael record probably shouldn't have ever been, but its combination of airy, raw production and its humanitarian, philosophical approach to industrial metal was one I really went for when the album released, and I still quite enjoyed it when listening to prepare for this review. Are the simplistic, repetition-focused lyrics meek? Sometimes, but just as often they're extravagant. Is it a disappointment after Passage? What wouldn't be? But if you're open to electronic influence, space raving on ski slopes, and listening to music that your girl/guyfriend might also dig on when you introduce it to them, then this might work for you. "Ailleurs", "Ways", "The Cross", "Infra Galaxia", "I", "Radiant Star"...all great songs... in fact only "Year Zero" is worth skipping.

There are no guilty pleasures.