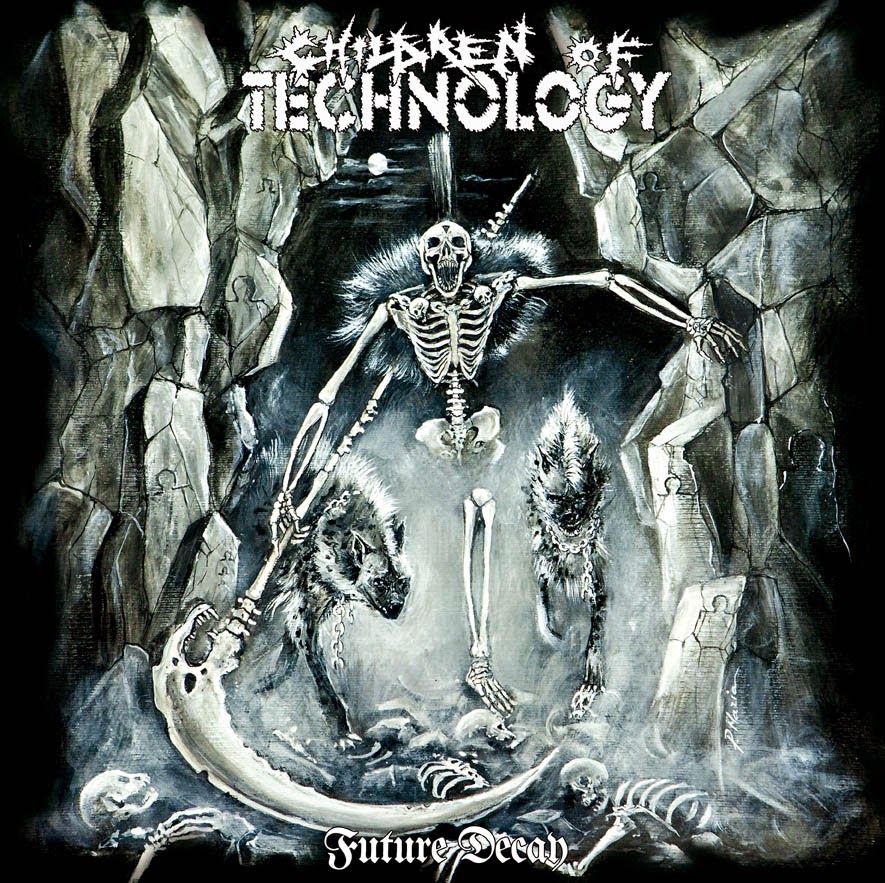 This is a band I've always wanted to like a lot more than I do. The post-nuclear streetpunk get ups, the great artwork, the viciousness they exude from every radioactive pore...Children of Technology are like the likely villains from some giallo low budget, obscure knockoff of The Road Warrior and they have the musical hooks to sound the part, too...so why don't they fully capitalize on them? The answer is that they often write songs with too obvious punk chord progressions where a bit more spit, venom, and thrash would really do the trick. Don't get me wrong, their modus operati is one of punk and 80s speed metal fused into a fun time with perhaps a little bit of a pessimist message about our shared tomorrows (informed by more than a few cult bands, books and films), but where the songs are so huge on raw energy, they're conversely so low on memorable riffing that I feel let down. Their proper 2010 full-length debut It's Time to Face the Doomsday was good stuff, the best I've heard from them, but even there it fell shy of excellence due to the simple fact that they're not writing up to the potential of their image.

Future Decay goes louder and huger in scope, with a seemingly broader sound budget that gives the bass and rhythm guitars a lot of momentum, while DeathLörd Astwülf's half-growl/half-bark is just as petulant as ever. Never forget your umlauts, kids. As for musical influence, this is still heavily centered on the 'splatter-punk' sort of crossover that bands like Corrosion of Conformity, Cryptic Slaughter and The Accüsed (what'd I say about umlauts?), but there is far less muted thrash style picking in the riff selections. In fact, tunes like "Future Decay" and "Blackout" incorporate a total tough nut NYHC aesthetic that reminded me heavily of bands like Sick of It All, Killing Time, Cro-Mags or the first Crumbuckers record. Brazen, bold chords that are meant to represent a circle kick or a curb stomp to the listener, but unfortunately here the patterns seem redundant with those that have come before in three decades of that medium. That said, they're not exactly a one-trick pony with that style, since the bass lines show some obvious Lemmy influence and they also pitch in a few squiggling, nasty speed metal licks the likes of which you usually hear by a lot of blackened speed thrash metal bands like Deathhammer, Antichrist, Cruel Force, and so forth, which pair up pretty well with that pissed off/constipated vocal timbre.

The Italians do not shy away from some atmospherics here, which balance out some of the blander riffs so that they don't ultimately feel as generic as they might have. Cleaner, deep vocals will soar over the thrust of some punk riff into the leather 'n' spikes city night atmosphere, and the intro with the pianos and throbbing ambient backdrop definitely conjures up an 80s cheese/horror film vibe which I was silently praying would be captured throughout more of the album. That's just not the case, though, and while there is admittedly some variation between the tunes so they don't all bleed together into one indistinct, monotonous heap, I feel like they just never go far enough with them. When they toss the odd muted thrash/core breakdown or even a part that hinges on death/thrash, it's just too banal sounding and never involves anything intricate or unique. The French band Zoldier Noiz, who toil around in this same pulp dystopian wheelhouse, do a slightly more interesting job of taking a fairly typical riff set and then owning it, putting a slight dissonant spin on it which feels fresher. And that's the thing: Children of Technology has an absolute shit kicker of a concept running here (and they always have), but too many of these retro theme bands settle for less when it comes to writing the music...

Don't settle for looking cool and trashing the bar. Burn the whole motherfucking street down in a frenzy! Write music that sounds like a swarm of giant mutant hornets on motorcycles, not just what-Exploited-riff-can-I-paraphrase-next! Have you not heard Animosity, Killing Technology, Life of Dreams or Rrröööaaarrr (umlauts!!!)? Those albums did what this one wants to, 27-30 years ago, and they sounded a lot more genuinely fucked up, brilliant and nasty doing it. Future Decay isn't a bad album by any stretch of the imagination, the production itself is superior to the music. But let's face it...Mel Gibson would kick this thing's ass before the opening title, where the first Children of Technology album might have at least made it a few more scenes before being run over.