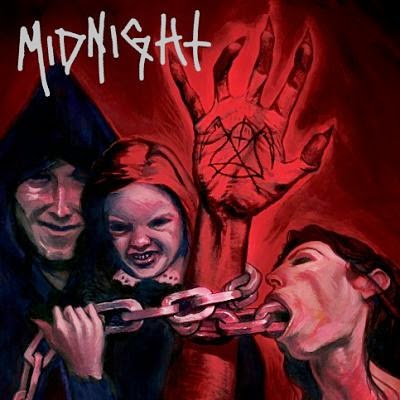 Attitude. Sometimes that's all it takes to elevate a pretty standard set of 80s inflected punk and speed metal riffs above the ghetto of mediocrity, and Midnight has excelled with this characteristic now for years, only now unleashing its sophomore full-length No Mercy for Mayhem upon an audience stoked off the leather, spikes, whiskey, women and ritualism of its predecessor Satanic Royalty, which novelty aside: rocked. With this album it didn't provoke my attention span to quite that level of entertainment, and yet we have a damn solid disc, readily accessible and aggressive for those waxing nostalgic for the grime and grit of 30-year-old shock speed/thrash outfits, of whom Venom is only the most obvious, but not the only brick mortared into this Cleveland maniac's creative foundation.

Punchy. Loud. Ready to roll through the dingy dives and dens of human vice, rocking the Devil's gospel to the irredeemable and then stealing their brides' souls and bodies. No Mercy for Mayhem is hardly nuclear physics, but a simple slew of chord-driven concussions and saucy little NWOBHM Kill 'Em All tail-licks which together make for a potent and nightclub-pungent 36 minutes of fun. Have you heard a lot of these note progressions before? Probably, since they're just so simplistic that hundreds of bands have stumbled across something similar, yet the purpose of a Midnight isn't to reinvent what we loved so much about our antique metal, but rather remind us of why we had such a good time with that in the first place. Granted, apart from gruffer legends like Lemmy, Hetfield or Cronos, you wouldn't hear such a raving bark as Athenar's on a lot of 80s speed...it trended towards shriekers like those of Exciter and their ilk, but that's one of those little nuances which makes this band instantly stand out to me...they know their limitations and never try to break free of that blood slaked theater, merely to make it their bitch.

It's somewhat of a stretch to label them 'black metal', I realize, but that influence does shine through in some of the lyrical content, if not much else. 'Blackened speed punk' is a more accurate estimation of what Athenar spits out the speakers...like a median between Venom and Turbonegro if it had been written by Mustaine, Ulrich or Hetfield when they were relevant. Blazing four or five chord patterns  that only rarely eschew their pulse-pounding momentum in order to set up yet another one, with a fatter tone than on Satanic Royalty which really makes you feel like you're in the front row standing before an amplifier. The rhythm guitars are humble enough to let the thudding bass guitars into
your headspace, a crucial tactic for what presumably is set up for a live three-piece, even though it's just the one guy performing all the instruments in the studio (at least on the new tracks). The drums sound pretty tight, never subjugated by the riff progressions and there's a bit of a trash can feel to them which lends even more authenticity to the back-alley charms of the record as a whole. Leads are efficient, wailing, straight to the point, with no arrogance involved, merely enthusiasm.

An album with such a genuine energy as this one is almost impossible for me to dislike, and such is the case with No Mercy with Mayhem. The caveat is that I thought Satanic Royalty had a few songs ("You Can't Stop Steel", etc) which were just more memorable individually, if not by a landslide. This is a consistent effort throughout all 10 of the harder tracks (excepting the intro), but there aren't really any I could say would stand out above the rest or rate even close to the company of Athenar's inspirations. In 30 years I don't know that we'll be humming the chorus to "Evil Like a Knife" or "Prowling Leather" like we still do for "Black Metal", "Iron Fist", "Long Live the Loud" and "Whiplash", but cult classic status or not, let's remain on the level...if this record came on during a car ride and you couldn't feel that urge building up in your neck to bang your skull in a frenzy, then you're either a One Direction fan, in which case: die, or you're already dead and in Hell, in which case: let me know about any real estate deals, because I'll be joining you there sooner than not.