Ghoulgotha - Prophetic Oration of Self EP (2014) 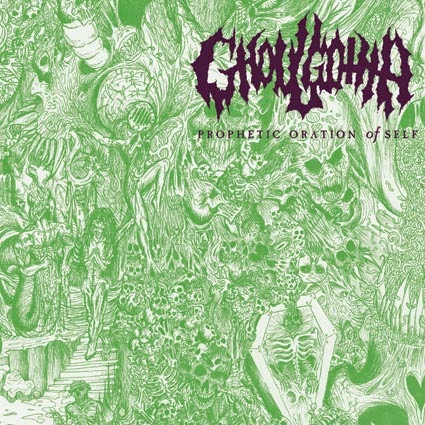 Things had seemed pretty quiet on the Wayne Sarantopoulos (aka Elektrokutioner) front these past couple years, whether from the burnout of the dozen or so retro death metal projects he was part of at the end of the last decade, or some other personal reason. But in truth, he was working away in his underground laboratory on this, the latest of his many incarnations, put together with a number of other Californian musicians. Three guesses as to what this sounds like? You got it on one: old school, morbid death metal with no inclinations to sound anything like it existed beyond 1993, only this time Sarantopoulos has taken on the dual tasks of vocals and the guitar, where usually he's been a prolific drummer. And he shows no lack of competence in either area here; though Prophetic Oration of Self does encounter some limitations, ability is not among them.

All the usual corpses have been cemented into the foundation of these two tracks: Incantation, Autopsy, Pestilence, Obituary, Immolation, Deicide, Grave, etc, but Ghoulgotha scores a few points for just sounding weird. It's not that the riff structures and notes are all that infrequent, but this band churns out slightly more atonal note progressions than normal, and when they hit their death doom stride in the midst of the title track, they have an atypical way in which they syncopate the slow, crushing chords along with the vocals, that prevents them from becoming too lazy and boring. The guitar tone is ugly and abusive, reminding me a lot of the old British and Swedish records out on Earache records in the label's prime (Bolt Thrower, Carnage, Napalm Death, etc), while the growls have two pitches, a guttural and snarl which when contrasted with one another remind me of how Glen Benton used to approach his older works, only the two inflections aren't in that same sort of constant, impish tandem. At times, you'll get a whiff of some of Wayne's other, better known bands like Decrepitaph or Father Befouled, only this feels more doomy than the former, and raunchier than the latter, with slightly stranger riff selection that gives off a marginally alien vibe.

Unfortunately, though my first few passes through the 12 minute EP were interesting, it's not the sort of stuff that holds up for long in the memory, and like so much of the other claustrophobic death metal being fawned over, it seems to triumph only in how it services its influences rather than how it inspires a listener with its own potential. Certainly Ghoulgotha is not the most banal and generic death/doom band to brood nostalgic in these times, and there are hints of more uncanny structural songwriting that should be fostered and refined for future releases...though I feel like 'refinement' might run contrary to the quartet's goals. At any rate, it looks fuckin' evil, and it definitely sounds unnerving for a short time until the inevitability begins to dawn that none of the riffs are really all that great, nor are any of the other components in the music. But there's no question that if you're into some of the other band's this guy has done like Encoffination, Beyond Hell, Father Befouled, Howling and Festered, this would be worth at least some passing interest due to its refusal to conform directly to what a few thousand other bands are aping.