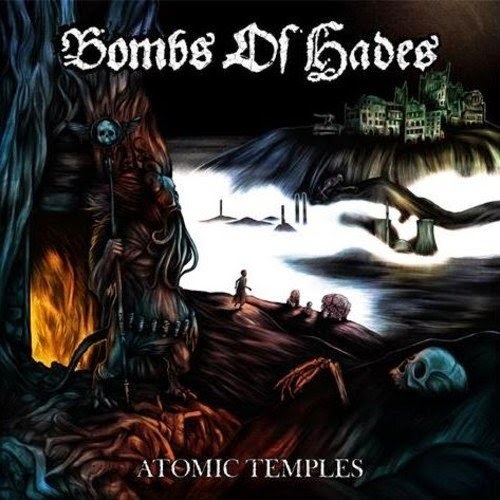 Bombs of Hades continue to eke out their own little corner of crusty, D-beat, Entombed worshiping heaven with their third full-length Atomic Temples. These guys have always had a bit more of an indie, punk/grind feeling to them which didn't always match up with their choice in cover aesthetics...in this case, the ghastly, enigmatic landscape present through the artwork doesn't really precipitate what you can expect from most of the tunes here. A few atmospheric, evil pieces drawn more directly from their Swedish death metal forebears, to be sure, but the rest is grooving, death rock & roll with loads of the expected drum beats and riff choices which don't deviate widely from the typical tropes of this niche.

You might indeed consider this the 'Wolverine Blues' of the Bombs' career, in that they seem to be risking a few more chances with the groovier, chunkier bluesy curvature of riffs like those found in "And Your Flesh Still Burns", which shuffle about with that irreverent swagger the foremost Swedes of the style explored a little TOO deeply on their mid and later 90s output. The guitar tone here is voluptuous, moist and nasty in tandem; kind of like my choice in significant others, only like with those, there is an occasional desire here to thwart my ears from what they're spitting into them, due to the nagging feeling that they're a bit redundant and I've heard it all before. But to these guys' credit, every time a track was about to lose me, then they'd almost balance it off with something more creepy and atmospheric. Example: "Palace of Decay", which opens with these morbid, fuzzy melodies that resonate over the boggy din of the cover. Unfortunately, even that tunes erupts into an all too standard riffing pattern which is just the same d-beat chord accompaniment with a few slightly deviate chord patterns that you've heard 6,000 in this modern wave of old school soundalikes...

Where the Bombs go into straight death/thrash metal picking, like in "Omens" which seems like Slayer or Possessed squeezed through a Stockholm filter, the music becomes more incinerating and exciting in turns and I almost wish they'd release a total fucking tyrant of a death metal record and stop fiddling around in the same Disfear/Discharge/Skitsystem territory that so many of these nowadays Entombed-core bands have trodden to death. Hell, with a little more emphasis on the riff patterns, these guys might even approach a level which could rival Bloodbath or Demonical or any of several other quality bands in a field of so much detritus, but Atomic Temples is only half firing at best, with L-G Petrov-like raving barks and guitar progressions that would only seem fresh to me if I hadn't already been listening to this shit for 24-25 years. There is promise here, that I do not doubt, and fans of Entrails, Feral, Entombed (Clandestine on), or the more rockin' Desultory and Vermin records might wanna take note of this. However, even though they achieve a nice momentum here in the 38 minutes they've allotted, and might seem 'cooler' than a lot of other bands doing the same thing (more attitude and street/cemetery cred), it's still the same thing, and I just didn't find enough to hold my interest for more than a few spins, besides maybe the sexy guitar tone.