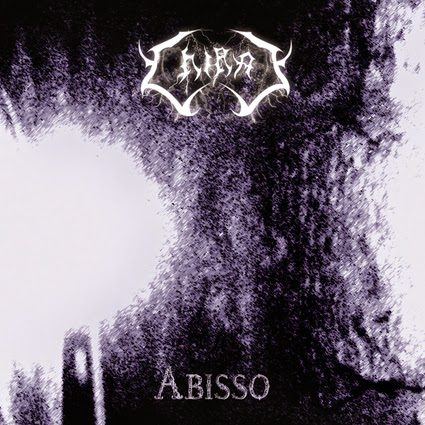 Though Abisso is unquestionably competent for a single man project, this EP came with a bit of disparity between the earlier tracks that I didn't think represented putting its better feet forward; said feet being the band's contrast of blazing melodic death metal circa the Swedish school of the mid 90s with acoustic and piano breaks that give it a little bit of a meandering, Opeth feeling compacted into tracks that won't take you the length of an entire commute to feel out. This is a self-released work by an Italian known as Chiral (also the name of the band), and might spell out some bright potential for the future, but I didn't feel like the tremolo riffing patterns that make up much of the EP's more desperate, surging moments were all that distinct or memorable even a short time after the roughly 20 minute experience had ended.

The tunes move between slow and fast, with the doom-like sequences comprise of sparser note patterns and carnal growls, and then the blast beats taking on a fairly typical structure with strings of notes that too rarely surprise or spin into a direction the listener won't expect; that is if you've heard this strain of black metal at any time in the past 20 years. The massive rasp this guy spits over the guitars is often a little too over the top, and once in awhile he'll inject a deeper, sewer-like growl that appears briefly. The the rhythm guitar tones are much thinner but dirty enough that it captures the Scandinavian aesthetic it so desires. The melodies fused into the chords are the general uplifting sort, with individual tremolo lines bleed along predictably. The exception is where he'll burst into this more interesting, almost symphonic/melodic metal hybrid like in "Atto II: Abisso" that features some more technical lead work, an exhibition that this guy does really have some proficiency, he just has yet to really master the songwriting necessary to take those to the next level. In fact, I would not have minded if he shredded just a little more over the remainder of the music...

Bass lines are audible, but take a back seat to the other goings on, and the cleaner sequences here feel like they were included more for variation and contrast rather than offering much interesting on their own; as if to lend emotional to music that doesn't itself leave too much of an impression. But I feel like the biggest gripe I had here was how the first tune really failed to set up the remainder...it crawls at a slow pace after some samples of a storm, and almost feels like Chiral is going to stride a massive atmospheric black metal path akin to Summoning, with the pianos and screams wailing on the edge of perception. After that it just breaks into some fairly standard melodic black metal (circa Old Man's Child, Sacramentum and Dissection in the 90s) with requisite blasting and I think it might have felt more consistent with one or the other. It's not that he doesn't shift into slower passages later in the EP, but for some reason that first track almost sounded to me like a different band than the rest. At any rate, this is a really new project, most of the writing was initiated this very year, so you can't exactly approach it with major expectations...and if Chiral can accomplish this in just a few months, what will he do when he has more longevity to work with?