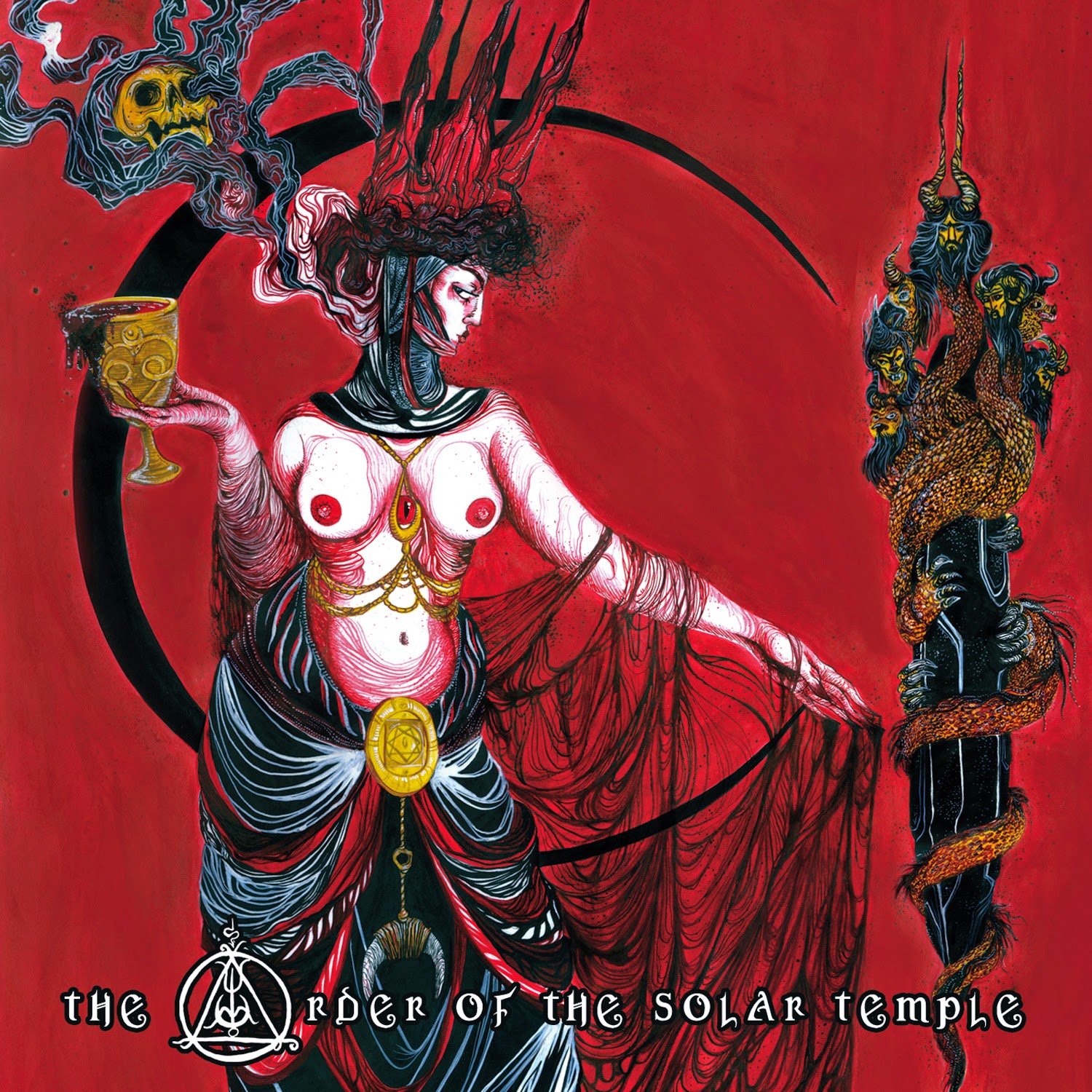 Don't be put off by the first track on this - "Fallout Woman" - which feels like a weird amalgamation of The Doors, Cream, The Cult and even a little of Mike Patton in the vocal sustain until the higher pitched screaming erupts. It's mildly representative of the rest of the album, and an entertaining tune in of itself, but what I really reacted to so strongly about The Order of the Solar Temple's eponymous debut is how it successfully re-brands NWOBHM-era riffing into a unique, psychedelic haze. Granted, we've heard a hundred bands reaching back into the 60s and 70s proto-occult prog rock field these past few years to attempt to rekindle those treasured ley lines of black magick, swords and sorcery, and hippie free lust...but so rarely do they sound the same...Ghost does not = Hail Spirit Noir does not = Blizaro does not = The Devil's Blood does not = Tame Impala. Yeah, the topical matter might feel samey, but I for one enjoy the feeling of revivification, compositional refreshment, new voices putting their own spin on their perceived notions of the rock of decades past...rose-scented, rose-colored nostalgic vibrations.

Vancouver triad Order of the Solar Temple adds yet another timbre into this choir, and a welcome one, incredibly varied and consistent in turns. Vocals shift between a Morrison-like drug den haze, to cheesy metal screams, to a strong mid-range redolent of the big BBs (Biff Byford, and in particular Blaze fucking Bayley) of English lore. Riffing progressions fall well within the span of the later 70s to about 1982, we're talking bands like Budgie, Angel Witch and Nightwing more so than Priest or Sabbath, but everything is fair game on this record. Pumping, shuffling, classy hard rock patterns are threaded with bluesy tail-licks and glistening, teary little leads and harmonies that eschew pretentious technicality to de-age the listener about 40 years, which in some cases will transform he or she into a pre-fetus, ready to have all of this wonderful rock impressed upon their being as they are squirted into existence. Once in awhile they'll be a lower end groove which borders on bad-ass (as heard in the midst of the track "Jervas Dudley"), but in general, beyond the experimental touches, like the unique use of instruments such as the Jew's harp, Mellotron and photo-theremin; or the more lavish, gradually orchestrated sequences (intro to "Aeon of Horus", for example), this is some pretty huge sounding retro heavy metal with an open-ended, airy production that is sheer bliss in the car speakers on a summery afternoon.

Bass-lines definitely cultivate the retro aesthetics further, simultaneously overt and subtle, grooves often closing the gaps between rock music and the excellent vocal R&B that our great-grandparents probably thought of as devil-spawned pap. The drums crash where they need to be, definitely busier than what you'd hear on a radio tune half a century past, reminiscent of how their fellow Canadians Blood Ceremony really lay into a groove. Leads in tunes like "Fallout Woman" also have a sporadic, improvised nature to them which you'd expect of some wailing blues busybody on tour in a dingy bar setting, and that all helps you down to get down! And that is what The Order of the Solar Temple is really all about: GETTING DOWN into the ritualistic corners of the imagination, making out or making love with a beautiful specter while a skull gazes on, wax from its cranial mounted candle sputtering down the cracks and gaps in the bone. If Anton LaVey had written Strange Days or Waiting for the Sun or Disraeli Gears while envisioning another Solar Temple in the future; it might sound a little something like this, and if you're not into that idea, well then please pack up your gear, leave the key on the kitchen table and forget we ever met on that seedy internet chat room that one fateful nite...because I don't wanna know you. I wanna hot shower away every trace of intimacy that we ever shared.