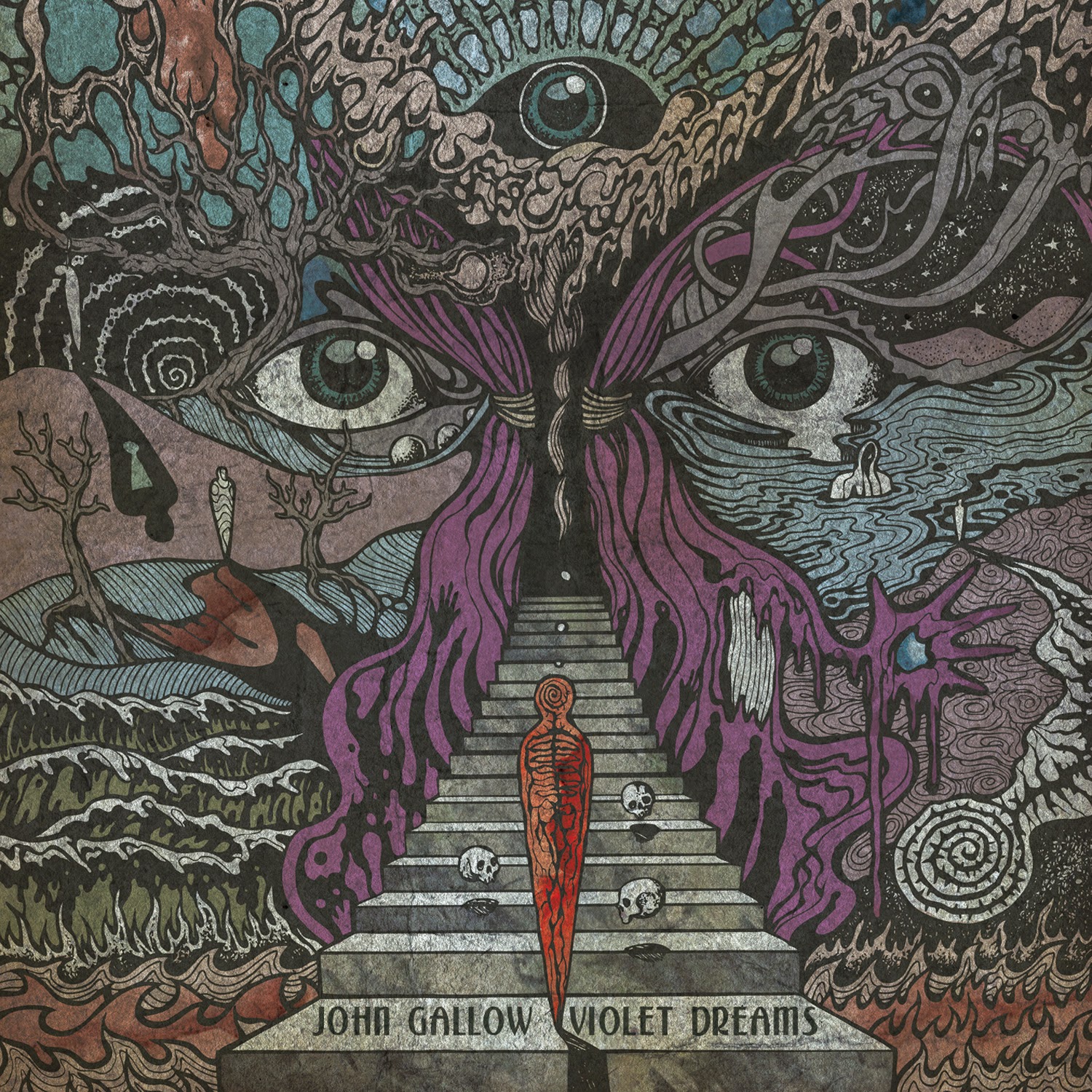 It would be a little early to dub Violet Dreams the 'best' doom metal of the year, but it's quite likely going to prove the most honest, a riffier analogue to his fantastic band Blizaro which released the Strange Doorways compilation last year. In fact, you could think of this as the 'heavier' alternate to that, for while the two projects do coordinate several of their psychedelic embellishments through the use of synthesizers, Sabbath/Paul Chain influences and Costin Chioreanu artwork, that collection of demo material felt more 'far out' in scope, due to the myriad of recording sessions involved and the varied roster which complemented John Gallo. Violet Dreams is naturally constructed as a consistent experience, an hour of dreary classic doom in which he performs all instruments and vocals and shines almost constantly.

Back to that honesty: it's not quite so traditional as you'd think. While there are obvious cues in the riffs that lead us back down cerebral highways to Sabbath, Trouble, Candlemass, and so forth, one of the things I find so reliable about Gallo is that he does not play the style like it's a dead end, with all scriptures and limitations set into place. You can clearly hear with every drudging, dreary note progression that the guy is playing with the potential in each phrase, attempting to adapt something you haven't exactly heard before. The evil, sluggish chords and grooves are very often permeated with these unexpected, standalone melodies and synthesizer segments which bring in a lot of that 60s and 70s prog aesthetic which was so cool on Strange Doorways. Whether it's the odd, disjointed feel to the jamming late in "Entrance to the Unknown", the pure New Age 80s giallo-synth of "Ancient Tears" or the bluesy instrumental "Part Ways" where the guy just splattered tremolo picked, wild guitar patterns atop a keyboard line, Gallo is simply not content to drone on and on with the same old shit that I hear on so many doom or sludge records. This music is about vision and songwriting, not about genre...

The authenticity translates to the vocal performance. Gallo doesn't do the guttural death/doom pitch, but uses his own voice with as much eerie melody and gravitas as possible. The catch is that he doesn't have some explosive range...he's not naturally gifted in this area. It reminds me a little of Wino, or Liebling, or perhaps Ozzy at a mid-range, because I always found he had that same 'blue-collar' appeal. Gallo makes due with what he's got, and while a few notes may occasionally seem wavering in pitch or inflection than some pro who has been taking lessons all his life, the tradeoff is that you're always right there with him. He is as Charon to these maudlin, sorrow filled landscapes, and you a paid passenger. If it seems unusual at first, it doesn't take long at all to warm up to them, and ultimately the record is stronger for the choice. I mean I love Messiah Marcolin, but I couldn't picture him belting out his operatic melancholy over tunes like these; there is a time and place for that and it works for mightier, crushing Gothic castle-tinted fare like Nightfall, but this record is much more like a humble craftsman pursuing the witches that have stolen his children and blighted the land. Gallo has a torch, pitchfork, and courage as he navigates these gloomy psychedelic haunts.

Guitars sound pretty straightforward, with a little cream, a little fuzz, always the blues, and yet plenty of unusual note choices and harmonies. Pay close attention to a tune like "Wall of Doom" where you can hear those gorgeous little melodies hovering off in the distance, or "Part Ways" where he's just flaying his soul bare. A few responsible special effects used to saturate the tone, but nothing that ever places form above function. The bass lines are likewise delicious, calm and clean grooves and hooks that support the rhythm tracks without just cloning them, to the point where the guitars could drop out completely and Violet Dreams would still have this solemn, immersive design. The drums are likely the one region of the album which is eclipsed by the rest...these compositions are served well by the simplistic pacing of the beats, and Gallo applies some fills and versatility, but I definitely think they take a backseat to the guitars, bass, synthesizer and vocals, and the album would not have suffered with a more fiery, resonant depth to the bass, snares and cymbals. Of course when the music is this dramatic and memorable, it's not much of an issue, so I had to pay a very specific sort of attention to deign to even nitpick that element.

Violet Dreams is not inaccessible on your first few spins, but it's a record I highly recommend you listen to as much as possible, because the moods and riffs seem to unravel upon further exposure so that they transform from 'compelling' to 'revelatory'. I was in love with Strange Doorways, and even more enraptured to these songs, especially some of the more glorious, patient pieces like "Turn Sides", "Wall of Doom", "Entrance to the Unknown" or the curious "Burning Trees" with the clucking percussion and swampy, evil Southern feel. But there isn't a stinker among the bunch, and you can almost guarantee there will be something unexpected awaiting you 14 times, but no cheap thrills...this is one I've been returning to repeatedly to the point where I've lost count. All depth, all the time. At its worst, it still rocks, but at its best: mesmerizing. Captivating. Hazy departures from the mundane. Decades-old overtures clad in current currents. Not just a work of doom, but of that which might lie just beyond our imminent despair.