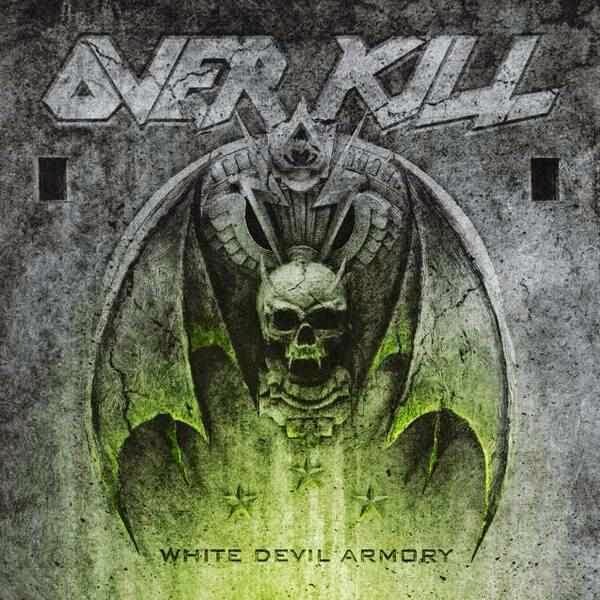 I had the inverse response to many Overkill fans over the course of the last two albums, finding The Electric Age more memorable and explosive than its predecessor Ironbound, which of course was the group's most viral effort since at least the earlier 90s, but I don't think there's any question that the incessant New York thrashers have found a new lease on existence this new decade which has catapulted them back to the levels of legend they deserve...and depending on whom you ask, have always maintained. White Devil Armory (which seems to me like it could be a syllable too long due to some last minute chickening out on the part of the band) is now the group's 17th full-length, and yet there is evidently no tiring of the joints or phoning in of much, just a solid, appreciably intense effort which throws a modicum of unused riffing phrases into the arena, but otherwise seems like business as usual, neither one of their strongest works nor worst by a long shot...

The deal sealer has always been the relationship between Blitz' pissed off, charismatic raving and the pulverizing guitars, and the bonds have been renewed here since these guys can still really knock out a verse/chorus structure without ever lapsing into tedium. That said, there are a lot of individual vocal lines in tunes like "Bitter Pill" which certainly recall older tunes, and I also believe more of a groove metal element akin to their 90s material. For instance, in that very same song there's a lot of low end thrash chugging redolent of early 90s Pantera, and in fact a lot of what Tailer and Linsk are playing on this particular album reminds me of Dimebag's technique, with the harder concrete grooves being supplemented with some melodic finesse, bluesier bluster and bar room attitude. That's not always a bad thing, unless you've got an eternal hate-on for the style, but those expecting the purest of thrash and speed experiences (Taking Over, Feel the Fire, etc) out of this disc might find parts of it to mirror an era of Overkill they don't really care to revisit. Only parts, I assure you, since so much of this is just uncaged bricklayer blue collar aggression reminiscent of the bigger label thrash masters of the 80s, with not only nods to their own legacy, but riff progressions akin to those found on records like Master of Puppets (listen closely to the picking through "Freedom Rings") Fabulous Disaster, etc.

On the production front, Overkill has rarely proven anything less than professional, and this one maintains that severely punchy, compacted rhythm guitar tone which goes for maximum impact in the listener's guts...effects are left to the atmospheric, melodies which almost always do their job of standing out due to the sound alone. The drums feel incredibly mechanical and clean, as if Lipnicki showed up with new cybernetic parts, but still human at the core. Loads of double kicks to help the and keep that harder relevance. This is not a band which has ever shunned the evolution of their medium...not that they've fully embraced it, but clad themselves in this or that technique to keep themselves 'current'. On the other hand, D.D. Verni's distinct plopping bass lines are fully intact, at this point on of their most recognizable characteristics alongside Ellsworth's singing. The leads did not always catch me, but it's obvious they try to, with scads of little licks in there that uphold the melodic ballast and variety of the rhythm guitars. However, the simpler melodies they'll toss onto a verse or bridge almost always give the music that extra something which pushes it up past mediocre.

Very few problems with this, and I can't really explain in much more detail why I don't like this quite as much as The Electric Age, but on the same fundamental level as Ironbound, beyond the fact that the songs just don't individually grip me as a handful did back in 2012. Rotten apples to squeezed oranges...it's an Overkill record, and if you've heard anything they did in the late 80s (Under the Influence, The Years of Decay) or really, EVER, then you're not going to surprised by a single second of this fucking music. If you're one of the old guard, you can crank this on your Harley while you cruise the strip in a tank top and combat boots, and still justify to yourself why this is one of your favorite fucking bands on earth and always will be. The attitude stays the same, as does much of the songwriting. Blitz and crew have never teased us with massive upswings in progression/evolution, and they're sort of grandfathered into just living up to a standard that they set so long ago. White Devil Armory is worthy of the brand, like a reliable steakhouse that you'll always fall back on when your significant other concedes a dining choice from one of her usual, eloquent and exotic Thai, Vietnamese or Indian haunts. Take a knife and fork and dig right in. Medium bloody. Wrought with iron. Just like the last few trips.