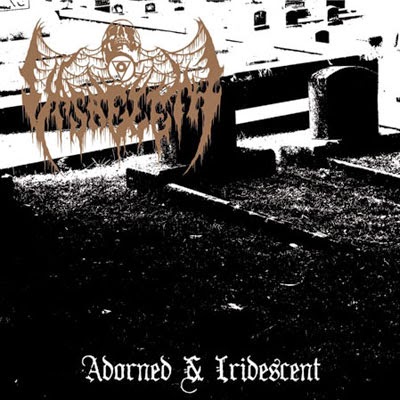 It's a curious thing to return to that leading edge of the cavernous death metal conglomeration so prevalent at the turn of the 20-teens, and Vasaeleth's Crypt Born & Tethered to Ruin was an effort I was somewhat fond of when it dropped in 2010 through Profound Lore. Adorned & Iridescent was a 7" 'preview' of sorts for that album, put out by Satanic Skinhead Propaganda and Blood Harvest Records, with two of the album tracks and a B-side which is, in retrospect, probably the only reason to check this out. This might lack that morbid, distinct color artwork by Antichrist Kramer that they used on their later releases, but the contrast of the band's superb logo against the black/white cemetery photo is still quite pleasing.

Adorned & Iridescent, like its full-length sibling, is essentially a paean to Incantation's earlier material, Immolation's debut and the churning, raw miasma of horror cultivated through the first few Autopsy albums, only this is seen through the lens of younger individuals who wanted to take those subterranean aesthetics and lavish them with a turbulent but modern, reverberating production which might lend it a better sense of 'setting'...if your setting is six feet beneath a sepulcher. You've got the roiling, tremolo picked guitars which feel like someone stirring your intestines with a ladle, with a few bridges towards death/doom territory with morbid, plodding chord progressions or even a few harmonics for eeriness. The guttural vocals are more like some caustic underground gas being blown across the ceiling of the caverns, than anything distinctive or easy to pick out from the music, and this is where that Craig Pillard influence comes in. The drums, on the other hand, seem sternly black metallic in focus, blasting nihilism which combined with the low end-ness of the whole recording almost grants it a coldness like the vast space between celestial bodies...

The riffs are alright, but occasionally they'll throw in a dissonance or unexpected left-hook chord which helps justify the largely predictable patterns they were producing (at least for anyone who had been around death metal in the late 80s/90s). What struck me about Vasaeleth was just the overall feeling you get when listening...some of the music is kid's stuff in terms of songwriting, but it most certainly felt like the raw breath of aeons being blown into your ears when you place it in context with what the duo of Antinom and O.A. were attempting to achieve. Unfortunately, for the EP itself, its little more than a footnote, since "Figures of Chained Spirits" and the title cut are better placed in among their six neighbors on Crypt Born.... "Unmanifest" has a more black metal current in the drums and chord choices, but I've also had that impression elsewhere in their catalog, and it's pretty flush with the two A-side tracks. At any rate, this was retroactively consigned to oblivion when the album dropped several weeks later, and it's ultimately useless to do much other than look at or listen to the third tune, decent if not mandatory; but it would not have been an unworthy introduction in 2010 if you couldn't grab a copy of Crypt Born, which just sounds better in general.

Verdict: Indifference [5.25/10] (call forth your name which mine becomes)