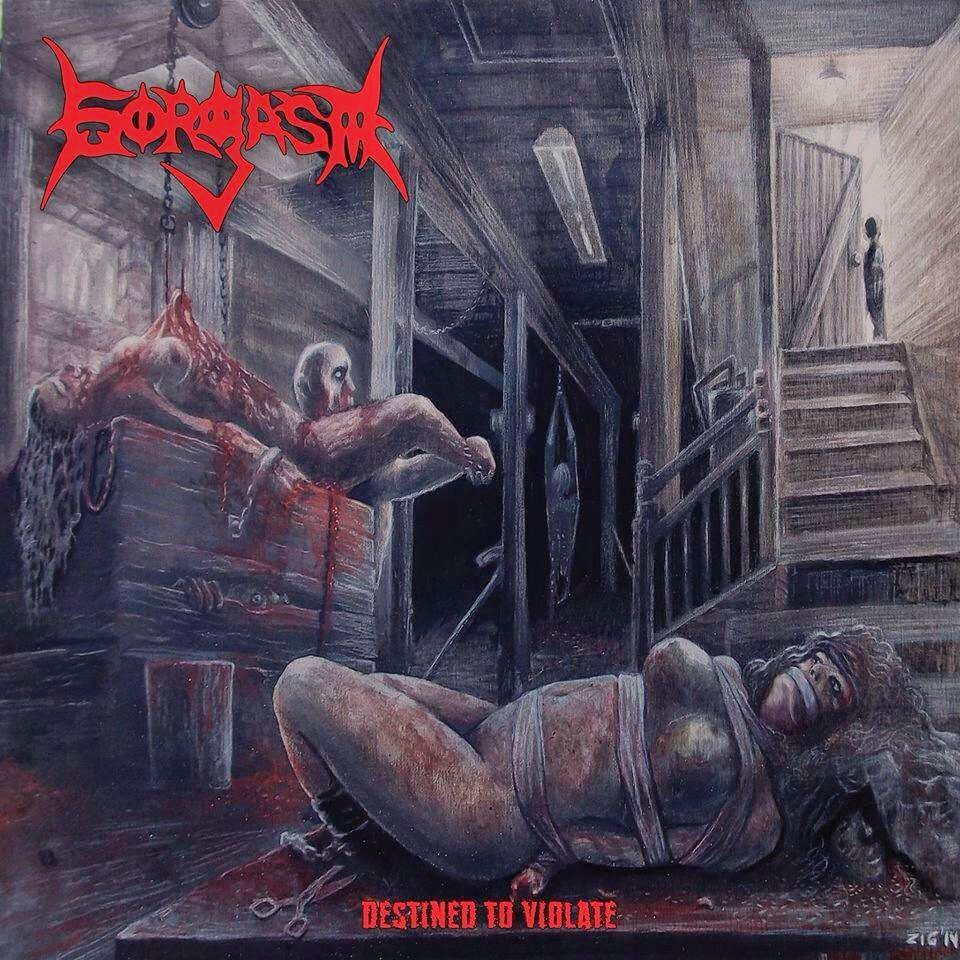 Snatching a satisfactory brutal death metal album out of the ether has become an increasingly rare commodity for me in recent times, so it often falls to the old standbys to get it done; and in terms of a US field clogged and constipated with technical djent deathcore, I generally feel forced to rely on someone like Gorgasm, who have delivered in the past with their Masticate to Dominate album in 2003. It's been over a decade since that time, with one reasonable full-length in between, but Destined to Violate, if nothing else, does manage to capture some of that enthusiasm of the later 90s and the last decade. It has its flaws, many of which stem from its inherent redundancy in the wake of a hundred other albums, but I don't think anyone will question the Indiana quartet's jubilation for punishing aural exercises in misogyny and murder...

To be quite exact about how this disc sounds, it's sort of like the clinical death/thrashing aesthetics of Pestilence's legendary Mallevs Maleficarvum, with the requisite tremolo picked surgical implements, clad in the armored brutality of mid-90s Suffocation grooves and set upon a killing spree which is reminiscent of Cannibal Corpse's Corpsegrinder-era pummeling uptempo passages, in both the pure punctuality of the riffing and the guttural syllabic meter employed. The guitars eschew the polished and over-processed tones of many of the band's younger, more technical peers, for something that feels belligerent and mildly raw, only clear enough to capture all the considerable notes being spewed forth from the team of Damian Leski and Ryan Saylor. Riff structures run the gamut from banal and predictable breakdown brevity to surprisingly interesting muted melodic barrages (like the intro to "Corpsified") that really want you to remember them before they cede their respective tunes to a more average compositional strength. Drums have an airy, forceful kick sound which I enjoyed, and there are loads of fills flying around to keep even the less interesting riffs excitable, and once again the band errs on the side of the lesser polished than making them sound like a computer program.

You've still got horror samples inaugurating a number of the tracks, from all manner of slasher films (I think there was one from Identity but I could be wrong); a practice as old as this sub-genre, often targeted at 'whores', but I did not find a lot of them incredibly effective leading into riffs that were not among the record's best. Likewise, the gross-out song titles like "Funeral Gangbang", "Mouthful of Menstruation" and "Lubricated in Vomit" are squeamish enough, but not particularly yucky or eye catching for anyone who wants their death metal truly over the top. The bass playing is solid, but I do wish it had been a fraction louder since the mechanistic colon rupturing of the rhythm guitars seem to steal the attention away from anything loitering beneath them. At the same time, it's really those rapid, precise riffing patterns that are going to attract or repel the average brutalitarian, so it's probably best that they be hung out on display like the corpses of victims in some taxidermy lab. I've never found the Gorgasm vocals to be particularly distinct for their field, and that hasn't changed, with the guttural barking and belching adequate but never entirely convincing beyond its genre specific function.

Destined to Violate is largely a run and gun sort of record; it does feature a few pure, forgettable mosh motivator grooves, but for the most part it snaps along at a pace slightly too swift for your headbanging to follow without ingesting a lot of sugar (or drugs) in advance. Ultimately, a few moments stand out from the rest, but it's neither a step forward or backward from 2011's Orgy of Murder. Decent to sit...or survive through for a number of spins, and continuing to wield the flesh chewing chainsaws of the band's legacy, but I have to say it: a little innovation here or there, or just a broader net of variation in structure, would do better to catchy my ear. Gorgasm seems to sit too comfortably in that late 90s era where None So Vile was this massively inspirational work that rubbed off on hundreds of other bands, where they clearly have the talent to surpass themselves. Anyway, if you're a loyal fan of Lividity, Cannibal Corpse, Severe Torture, older Cryptopsy, Suffocation or Prostitute Disfigurement, you'll find this is chasing you right up your alley with a meat cleaver.