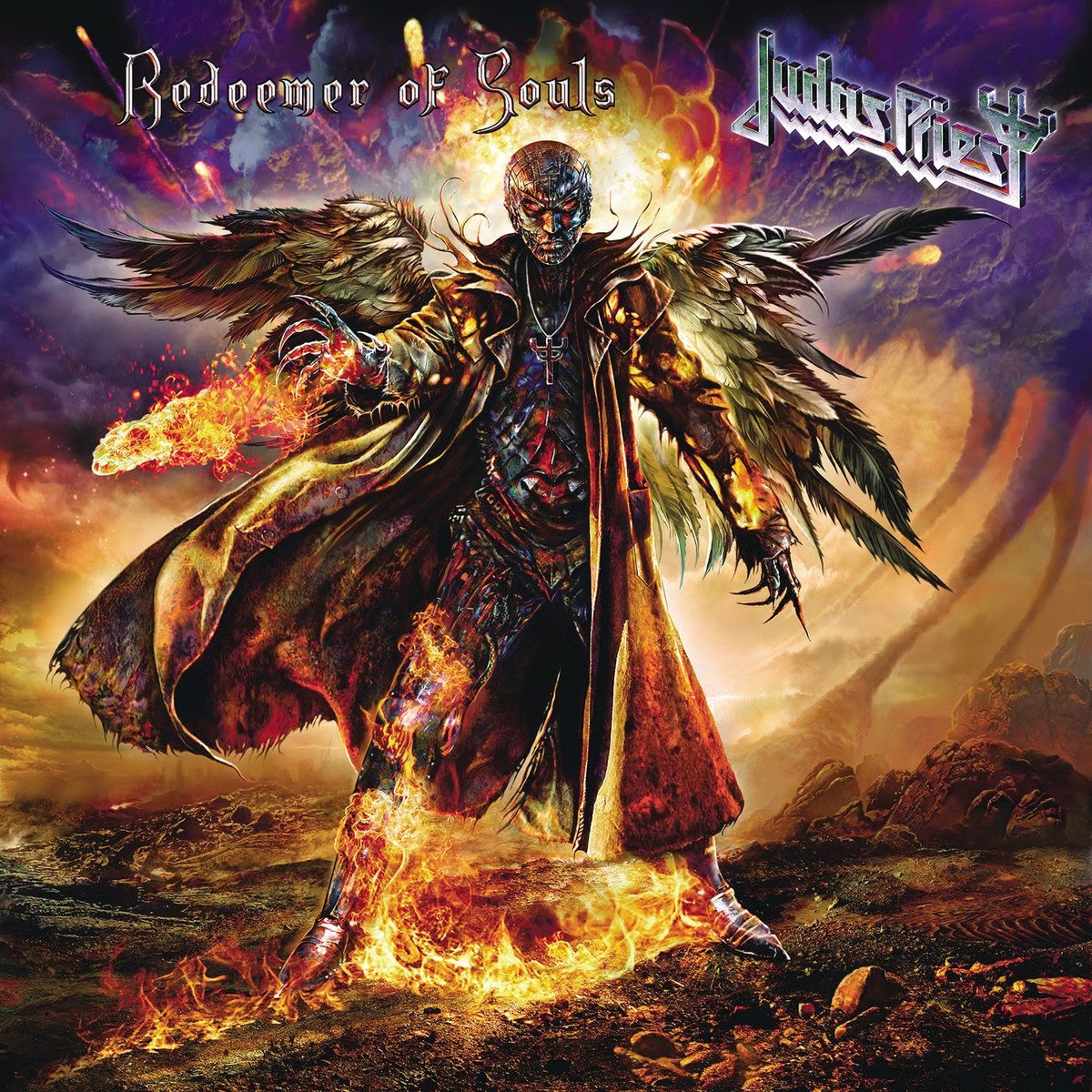 I'll start off with the verdict for once: it could have been worse.

That is not to say Redeemer of Souls ranks on any meter as the sort of career redemption the UK vets implied through their choice of titles, but had they produced what amounted to another overblown waste of time like Nostradamas, my faith in the metal gods would have become incredibly difficult to defend. No, this is essentially a sort of pseudo career retrospective wedged into a supposed swan song, of which the worst crime is that compared to any of Priest's classic run ('74-'90) it feels clunky, retread, uneven, and certainly lazy in enough places that you wish they would have spent a lot more time putting it together...even though it feels like they already spent aeons. But I have to be honest...this is a band I've listened to now for 35 years, and for 2/3rds of that time they have not had much wind in their sails beyond touring, keeping their brand out there, trying out another front man, failing, reuniting with Rob, pressing on, losing K.K. Downing...effort was put into this band on most fronts, but just not in the studio. There was almost no possibility this was going to be good, so I'm simply content that it doesn't suck.

As the cover hints, and many reviews I've seen would have us believe, this appears at first like a call back to the Painkiller years, which is only partially true. The album front loads an inconsequential '88-'90 rager in "Dragonaut" which features some of the most tepid riffing on the whole of the disc, and then follows that up with the title track, which is nothing more than a paraphrasing of "Hell Patrol" only nowhere near as timeless. But once you go in and break down the rest, there is quite a lot of representation here for both their groovier hard rock roots and more heavily conceptual 70s material. In fact I'd say that, from a distance, the album seems to be about 50% what they were doing with its predecessor, Painkiller-lite, albeit with less or no orchestration involved,  and then 50% waxing nostalgic for the era in which they were a dominant radio force in hard rock and heavy metal. At the same time, nods to the Halford solo records, which represented the man's best work since 1990, are also ubiquitous here. I felt like I was listening to Halford IV numerous times, what with the ProTools-ish punch of the rhythm guitars and the heavily moderated/souped up vocal harmonies that partially hide the wear in his voice...don't get me wrong, he still tears out some fucking lines here that remind us why he is perhaps the most important vocalist in his medium, but this is not "The Ripper" or "Victim of Changes"....

Rob is dealing with the inevitability of time, but most people would pass on both their testicles to science in order to sound like this beloved man at the age of 62. Elsewhere, the band sounds on/off in equal measure, phoning in a slew of saccharine rhythm guitar patterns which dive into basically the lion's share of NWOBHM which the band predated and subsequently outlasted, especially a couple licks that recalled vintage Maiden in addition to their own substantial canon. They can snare us a little more consistently with a bluesier hard rock groove more so than a recycled proto-power metal lick, and the leads are fluent and flashy enough to distract the ear from the relative mediocrity of what is typically happening before, beneath and after them, but whether it's due to the newcomer Richie Faulkner or the lack of Downing, I can't really say. If K.K. were performing these very same songs I don't think the results would fare much better. Elsewhere yet, Scott Travis shows up for a paycheck: the guy can play, but he's only ever as good as the music he's providing the skeleton for, and while you can 'notice' Ian Hill following along the root notes, well grounded as usual, he has just never had a presence with this band that could earn him a place among the ranks of essential bassists. I mean I know it's not how Judas Priest writes, but I'd just love it if for once in 44 years he could just let loose, let us know what he's been hiding all those decades...

Structurally, the album starts off with the aforementioned, skippable harder/faster tunes and then actually picks up in quality with "Halls of Valhalla" (decent power metal, superior to anything of Nostradamas) and the mid-paced, driving "Sword of Damocles", in which only a few of the vocal lines really feel exceedingly familiar, but it has a nice swagger, as does "Marched of the Damned", which functions largely because of Halford's vocals and a nice chorus riff. "Down in Flames" starts off pretty strong too with a nice melody cut into the intro lick, but that song is actually where this brief flurry of 'decent' material kind of drops off, and never recovers, with an unbroken sequence of the worst songs on the disc, like the cheesy Painkiller-era wannabes "Metalizer" and "Battle Cry", or the bluesy, generic "Crossfire". In short, there is about an EP here of material worth saving for a B-sides compilation, but it's really just not good enough for Priest. In a few weeks, who will care about any of this? They might suffer you a few of the tunes live, but you know you'll be pining for the 50 or so brilliant songs they wrote so long ago.

For a group so bloody consistent through the first third of its career, one would really hope they could reach somewhere deep within their imaginations and produce an epitaph worth remembering, but I fear that's too much of a Hollywood storyline to apply to reality. Redeemer of Souls is more or less this year's version of Black Sabbath's 13, symptomatic of a band which still recognizes what made it so special in the first place, but cannot achieve that level of songwriting because it has run short of riffs that feel even tangentially compelling when compared to the impressive legacy they stamped on heavy metal a lifetime ago. At the same time, it's not complete trash...a few of the ideas are not half-assed, if not exemplary either, and there are about 15-20 minutes of pleasant Priest to sift through.  It's better than the two Owens-era records, and certainly Nostradamas, but slightly less solid than Angel of Retribution. It's just not a high note to go out with...and considering Rob can still hit some high notes, I'll hold on some sliver of hope. That gibbering late 70s/80s fanatic child within me wants to hear a record he loves by this band again, and not by Halford or Primal Fear or any other band. Kick the new guy, get K.K. Downing back and do it right. We deserve as much, and more importantly, YOU DO.