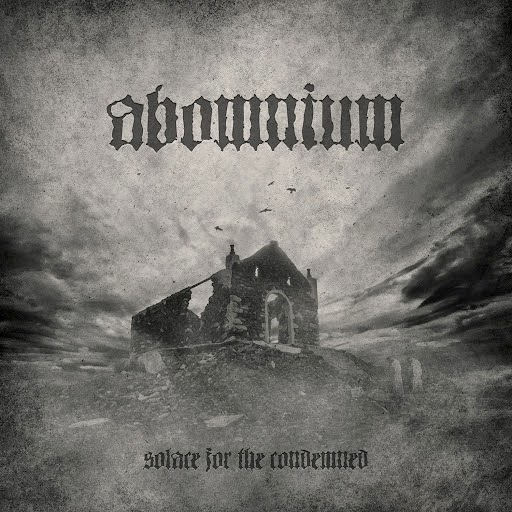 When I first checked out this one-man Dutch band's second album Coffinships, I was really hoping to get into it. The reviews I read had raved about it, and I dug how Sapient had taken the old Irish story behind the title and placed it into a science-fiction milieu, not to mention the amazing cover artwork. Alas, what I actually found on the disc was a mix of (mostly) black and death metal with a lot of uninspired, predictable riffs that seemed to go nowhere of any import. There was an appreciable level of variation there, and the production was really great, loud and clear...which might have led a lot of listeners to enjoy it more than they otherwise would have, but I just couldn't get over the bland rhythm guitar patterns which often toiled in redundant, conservative note structures which would have already felt tired in the mid 90s, nevermind 2013...

So as I sit here listening through its successor, Solace for the Condemned, I have to say that things have not heavily improved, but the overall impression is one slightly better than Coffinships. The tunes are still build around these huge swaths of bog standard riffs with simple chord patterns crested off by higher, ringing guitars that generally only alternate between a few notes. Ideally these would all be a smokescreen for more involved progressions that appear in their midst and totally stick on the ears, but that just doesn't seem to happen often enough to matter. He switches it up quite a lot, with a lot of death metal subtext and then even some slower, swaggering black & roll lik ethe tune "Jad Al Juaza" which places a Nile or Melechesh-like riff pattern into a near-hypnotic, ritualistic sway like you'd find on Satyricon's Now, Diabolical or Age of Nero. There's also a lot of war-like momentum to the drumming which seems to me like a mixture of late 80s/90s Bathory and the faster material of Primordial. Sad and solemn, funereal tremolo picked melodies often emerge, as do comparable, lower end death metal passages, so Sapient really likes to walk the line between the two genres, only neither is convincing enough on its own to compensate in union.

Production-wise this is still somewhat impressive. Robust rhythm guitars and thinner melodies, all perfectly clear without excess, polished sterility. The vocals feel more or less like a footnote of underwhelming, hazy growls and rasps that disappear all too easily into even the least compelling guitars on the album, but the percussion at least drives a hard bargain between the pummeling kicks and higher end tinniness. There is indeed a functional degree of variety here, with the greyer, slower, moody moments of sparsely picked, slightly dissonant upper strings offering a contrast from the driving majority, but the overall timbre of the album started to blend together for me by around the 6th or 7th track, and being that I wasn't having the greatest time to begin with, it was often a struggle to pay much attention. Had the material been either 1) more complex or 2) more subtle and nuanced, then it might prove more memorable, and it's still impressive that one guy can put so much of this together, with no alternate perspectives to dilute his vision...yet by the end, Abomnium seemed to elude my interest once more.