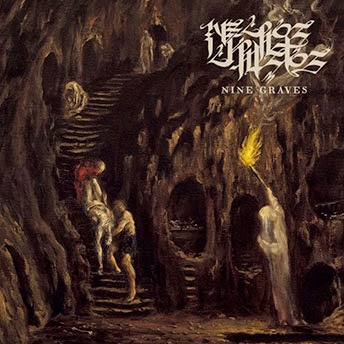 My response to Germany's Necros Christos thus far is that they rank among the more ambitious of the old school death metal throwbacks in how they incorporate loads of instrumental, ethnic vignettes as a counterbalance to the metal elements, and also have quite the eye for packaging that is no doubt responsible for a lot of hype that surrounds them. Unfortunately, I just haven't found the band's music to really live up to repeated scrutiny, being that the riff selection left a lot to be desired. Both Triune Impurity Rites and Doom of the Occult were decent albums, don't get me wrong, but I rarely found myself breaking them out to re-listen after the several mandated review spins.

So I was a little surprised when I came across "Black Bone Crucifix", because it seems like the group had examined itself and decided to get a little more in depth and charismatic with the rhythm guitars, as they weave between both occult death metal nostalgia and crawling, funereal death/doom. The riffs in this thing are both laid back and genuinely evil, the lead placement invigorating, and though they don't play with a level of extremity or saturated, obese gutturals or cavernous rhythm guitar tone that a lot of folks probably expect of that Autopsy/Incantation niche, the drums keep delightfully busy enough to give the riffs a sprightliness that amazingly does not betray their diabolism. Fuzzy and direct tremolo picked riffs give way to the slower sequences where atmospherics like organs or bells are sparingly implemented, while the solo harmonies always stick way out like patterns of candles being lit around the circumference of an ancient summoning. Vocals have a straightforward bark with a modicum of reverb, but their nihilistic tendencies weave well into the gloomy environment created by the guitars and drums. It's not like it didn't work before, it just works better this time...

As for the acoustic guitars/percussion that represent a lot of the 'temple' interludes, some purists will scoff at their presence, but I find they really place Necros Christos into their chosen context: that of the brooding, black world antiquity as seen through the lens of an early 90s death metal band. As brief as most of these are, they still seem like they required a little bit of work that they'd be catchy enough to maintain the listener's curiosity, and frankly I've always thought this was one of their more standout characteristics. But it's the meat of the matter, the death metal component, which has on this EP improved steadily, if not dramatically. The style is not much different than Doom of the Occult, it's just that note placement on cuts like "Black Bone Crucifix", "Baptized by the Black Urine of the Deceased" and "Nine Graves" itself which keeps me coming back. Quite enjoyed this.