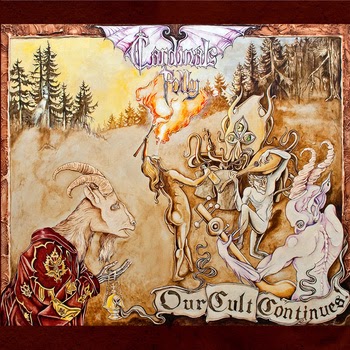 This was actually my first brush with Cardinal's Folly of Finland, despite it not being their first record, so I was immediately drawn in by the opening track "Chant of Shadows", this creepy atmospheric piece which lives up to its title...occult samples, gloomy multi- tracked vocals, droned out guitar feedback and thudding bass that was used like a percussive bottom end for the remainder. Sadly, once the next tune "Morbid Glory" broke out, it became evident that the intro was going to be an exception and not the rule, but even then the Finns have a slightly unusual approach to the doom medium which made for a decent, often interesting listen. The cover art definitely fired up the imagination with its more colorful approach to the ritualist orgiastic baphomety we so often associate with the tenets of Satanism in cult horror film and literature, but the music itself doesn't consistently enough cling to that aesthetic.

Our Cult Continues! is all about its massive, fuzzy guitars and louder, plodding bass grooves which both tend to dominate the recording while the wistful, everyman vocals of M. Karnstein just sort of hang in there with an accented, weird tone to them (somewhere between Yearning, My Dying Bride and Reverend Bizarre). You'll experience the simplistic, 70s-borne chord patterns so familiar in many doom and stoner rock bands traced back to Sabbath, but they also will sprinkle in some more tremolo riffing, melodic higher-pitched progressions and other elements you wouldn't necessarily expect. Unfortunately, as you might have guessed from the opening few lines, this was an occasion on which I found that the more moody and atmospheric the band became, the better the music was. Their straight out riffing patterns leave something to be desired, adequate for the style but never really standing out like the classics which inspired them. But then, when you hit a toon like "Sighisoaran" with its more soaring, sorrowful vocals and mourning guitars, or the bass-driven charge of "The Lovers Crypt", it all becomes so much more effective, and these are genuinely great songs that I kept going back to...

The album's a fraction louder and muddier than some might find comfortable in their doom, but the band isn't performing with such harrowing despair as an Electric Wizard, so instead it gives off a more garage rock vibe only if jammed out by bands like Witchfinder General or Iron Man. The vocals were real spotty for me...I realize the guy is also contributing the bass, which is an extremely important factor on this record, but when he sings it's either appropriately melancholic and melodic or just sort of laconic and sloppy sounding. Each line is a roll of the dice, really. In the end, this was one of those cases where I thought about half the album was really good ("Chant of Shadows", "The Black Baroness", "Sighisoaran" and "The Lover's Crypt") and the other half not so much, so the two sides sort of balanced one another out. But I have no question there is some promise to this band, and with only a few tweaks they'd be representing the forefront of nostalgic Finnish doom alongside neighbors like Seremonia and Reverend Bizarre. Coincidentally if you like those groups, the current wave of retro psych/occult doom, or the rosters of Rise Above and Hellhound records, then it's likely worth the hour of time to check Our Cult Continues! out.