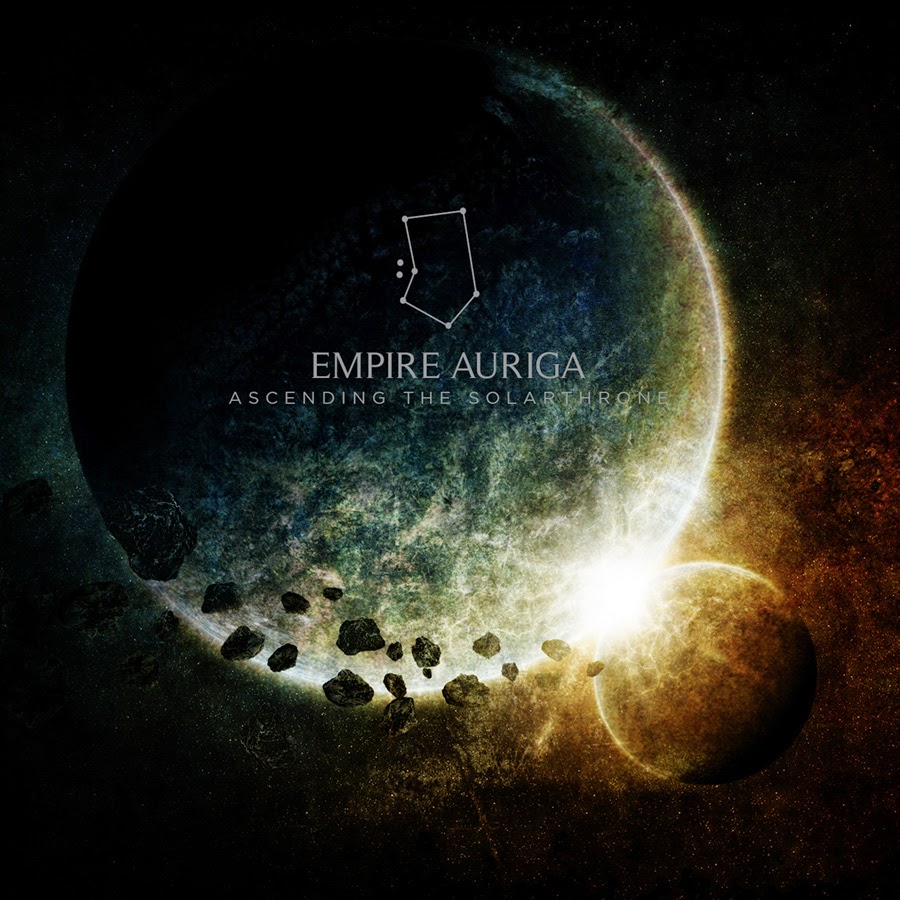 Much like its predecessor Auriga Dying, Ascending the Solar Throne functions far more effectively as an ambient/industrial piece than a metal one; no doubt what the Michigan duo had intended, and yet still clinging to its black metal inspiration in the use of ungodly snarled vocals and walls of heavily effected tremolo picked guitars, or raw, droning chords that take inspiration from the more suicidal, depressive black metal sources. I suppose Empire Auriga belong in the same sphere as acts like I Shalt Become or Austria's Summoning, only the thematic geography of is a long way from the former's varied-by-album concepts and the latter's Middle Earth fixation. Instead, the duo inhabits a sort of metaphysical/cosmic environment in theory, but the music felt a lot to me the ruins of burnt out, blasted industrial cities on distant world where the hostile, native environments have reclaimed the technological defiance of advanced human civilizations... Radiated memories, floating through the now-empty shells like phantoms while fields of radars still reach to neighboring worlds in hopes of a signal...anything.

Sounds pretty cool, right? If you can subordinate yourself to its sense of escapism and sense of 'background' aesthetics to a bright nightmare, then this is certainly an improvement over their debut, but it does still lack somewhat in the personality department. Walls of distorted, heavily affected guitar are used as an atmospheric cloak to the clunking, minimal sense of percussion, as opposed to the riff-centric structures we associate with most black (or other) metal acts. The vocals range from distorted black metal rasps to more wailing, edge-of-perception haunted tones that seem to blend right into the blinding, fiery ambiance of the guitars. There is no tenable bass element to the music beyond some of the deeper drums occasionally resonating off into this or that speaker, but this is not really the sort of style that would benefit from it. No, tunes like "Jubilee Warlord" and "Are You Worthy of Gold?" feel more like you've just awakened from a cryogenic sleep in a post-apocalyptic survival capsule buried on the edge of a desert, and you nearly lose your sense of sight once the airlock doors open and you behold the fiendish radiance of the sun-stroked wastes...

And then "Waste" takes the sense of foreboding even further: dissonant, raw-as-fuck filtered chords giving the impression that this nuclear wanderer is being stocked by mutant scorpions who have yet to finish proving to mankind who is the new king of the food chain. I kept thinking of the film version of Zelazny's Damnation Alley when I listened through this disc, or Fallout 3, rather than the fields of colliding asteroids and glimmering celestial bodies the band might have intended, but I guess you also do get a small whiff of interstellar radio noise being broadcast through the uncaring void. At any rate, if any of the imagery I've painted in this critique tickles your curiosity, and you'd rather have such music crafted in an uncomfortable, repulsive means rather than that of melodious warmth and harmony, then Ascending the Solar Throne is probably worth the time. It's not too heavily industrial, more reliant on the stinging static of its guitar effects than on beats, so just expect something a little more loosely defined, which leaves plenty of terror for your imagination to fill in, rather than incessantly guiding your hand through a standard pop or rock song structure. I have a feeling there is better yet to hear from this pairing, but the sophomore is undoubtedly more effective and troubling than its predecessor and consistently caustic.