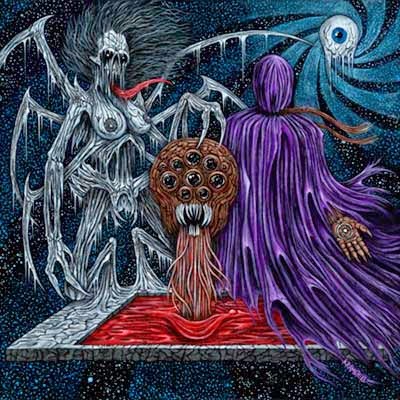 What a title, what a cover, and what a level of expectations for creepiness this thing had set before I heard a single sound off it. All Uproarious Darkness is visually comparable to the Crypt Born & Tethered to Ruin album, but privately I had hoped it would expand Vasaeleth's sound upward and outward. Alright, maybe those are not the best terms to apply here, since the band's aesthetics are so deeply rooted beneath the dirt, but that's really an obstacle so many of these acolytes of the old Incantation, Autopsy and death/black war metal bands face: how to refine a template and deter potential monotony they might face from repeatedly dipping into the same, opaque waters...a hurdle that this duo does not quite leap, but at least tries to sneak around.

If anything, All Uproarious Darkness is uglier and more primitive than the full-length, a real racket of primordial tremolo picking and Neanderthal gutturals that seems like they stepped into some weird alternate reality in which Wells' Morlocks had taken over the planet, and paid bloody, black audio tributes to their pantheon of deformed deities. The drums and general pacing of half the material fit both the black and death metal paradigms, which reminds me a little of the ugly Canadian war metal outfits of the 90s, but over the top you've got these utterly barbaric tremolo picked riffs which eschew harmony and memorability for sheer Cyclopean force, while the gutturals just soak in the cavernous atmosphere much like they did on prior Vasaeleth records. Occasionally the beats will slow down to a death/doom step, but I found some of these sequences really vapid in structure and even less likely to create much of an impression than the rest...even some of the unexpected, clever chords they'd occasionally spat out on the full-length album seem to have gone the way of extinction here, and beyond a few of the lurking, eerie turns and patterns in "Fathomless Well of Ruin" and "Throat of the Grey Watcher", I found myself a little bored listening through this.

That's not a fault unique to Vasaeleth, of course; I feel like so many of these suffocatingly underdark death metal bands usually have about one album in them which sails by on atmosphere and all the best accumulated riffs they can muster, and then when it comes time for a successor they just tend to stay too snugly in their wheelhouses. Yeah, it's a little strange to call extremity like this 'snug', since it would freak most of the humanity the fuck out while they struggled to even identify it as music, but it just doesn't come across as if a lot of effort was placed into it. Crypt Born & Tethered to Ruin was an excellent control group from which the band could have branched out and summoned up something truly impressive, but I'll be the first to admit I don't want to hear 10 more albums just like it. This 5 track EP is not an exact duplicate, but sojourns along an even more crude course which thrives on loyalty to its gloomy designs rather than the composition of unforgettable, evil songs. Some might love it for that very reason, but I just wanted something more daring and horrifically adventurous.