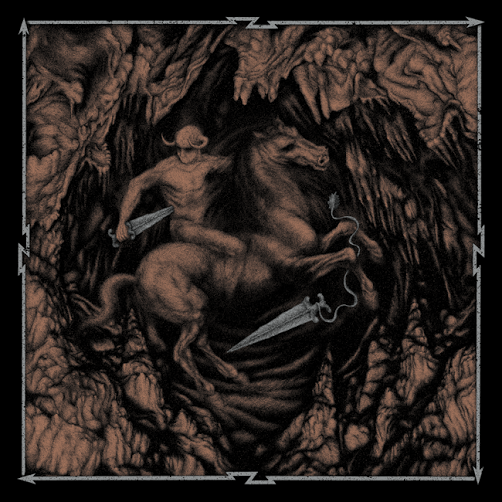 There must be quite some pressure on this Swiss duo, having raised many expectations with their previous 2013 Aura, which garnered loads of positive feedback (I am no exception) and even got them flown in for a Maryland Deathfest here in the States. With all that on their shoulders, you might expect them to buckle and break, the 'sophomore curse' take effect, not that it generally applies to the short form EP releases they seem compelled towards, but in lieu of something more substantial, it counts. Well, Soma is not as good as Aura. I'll say that up front, but with the caveat that I found the two tunes here a little uneven in their quality, with one matching the last batch of material and the other coming up slightly short.

Bölzer continues to mete out an atmospheric hybrid of black and death metal in equal proportions, the former coming through heavily in the vocals and a few of the faster riff progressions, which are often redolent of Immortal on the song "Steppes" to the point that tonally and structurally the pacing and plot of that particular cut wouldn't have seemed out of place on Sons of Northern Darkness. Now the death metal element is cut from the same cloth, some of the tremolo picked guitars definitely feel more like a morbid throwback the earlier era of that genre, and there are also numerous gutturals to support the KzR's standard rasp, but the distribution might marginally lean towards the black when you factor in the lack of much bottom end/bass to the recording (they perform as a two-piece), the lyrical themes and artwork. Either way, it's how they approach this union which makes it seem more unique and effective than most of their peers who engage in this same crossover space. The actual techniques have been stripped back to the genre's origins, but they don't approach songwriting with that same over-the-top blasting, furious war metal mentality I generally associate with black/death.

That said, I haven't really been able to get into "Steppes". I appreciate that the palm mute to tremolo Immortal-meets-Bolt Thrower riff phrases do give it that feel of a great bloodstarved host marching across that selfsame terrain, but it often too dry to stick to my ears, whereas the bulkier "Labyrinthine Graves" (almost 13 minutes long) brings in a lot more of the atmospherics and range that I loved on Aura. Pensive, thundering drums built off fills continue into a compelling, simple tremolo guitar line with an unusual depth, and they layer in a lot more of the grotesque layered growling/rasping vocals, including some good ol' Tom G. Warrior/Nocturno Culto grunts which function as a callback to that legendary countryman, and really elevate the song when accompanied by the lower chants around the 5:30 mark in the tune. Also the ambient finale to this second tune is stunning, cavernous but soothing tones resonating off the roof of some faint picking; it really tied the experience together and gave me a stronger emotional feedback than I would have expected to that point.

Stylistically, the two tunes are connected well enough, so the riffs from the first do flow naturally into the second. I simply felt as if something in the Bölzer formula was absent in the first that was then reinstated with "...Graves", and so my praise for this EP is heavier in the back, where Aura was really damn consistent throughout. This is good stuff, and I've listened to it a half dozen times, but mostly for those closing components. A larger issue with this group is that I feel like their style of writing might better lend itself to a full-length experience, 40 or 50 minutes in which the band can really thread their penchant for gradual development into some truly brilliant escapism. Here, once the goings really start to get good, it's over unless you loop back into one of the two tracks. Soma is ultimately a marginal disappointment if you go in listening for another revelation, but not the sort to give me pause as to their greater potential. Just an open/shut case of me not digging one track as much as the rest I've heard. Otherwise, it did transport me to that same nocturnal plain that they did last year.