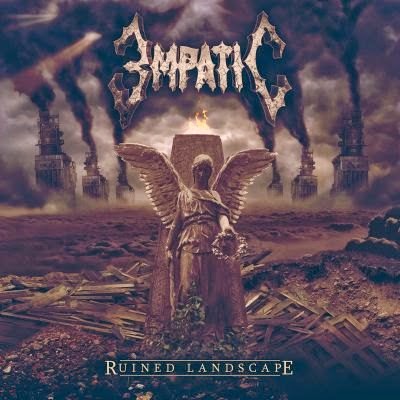 I reviewed the first Empatic record, Gods of Thousand Souls, back in 2010, and that was a decent effort in terms of accessible death metal that doesn't quite reach the brutality level of their Polish countrymen like Vader or Behemoth, but nor does it subscribe to anything particular trendy or disingenuous either. Enjoyable, but nothing that's going to send you packing for a t-shirt and coffee mug bearing the band's brand. Ruined Landscape is a more pensive and better structured record in much the same vein as that one, on which the brighter moments shine oh so much more brightly, but the laborious, chugging tendencies don't always reveal the most creative or interesting riffs...in fact there are a couple guitar parts on here that just should have been sent to the scrapper because they come across like really lame groove metal or metalcore...

These are in evidence very early on, even in the first tune "Trauma" (funny enough, the name of another Polish band that this one occasionally bears semblance to) which sets up a really nice piano intro and features some spacious, sad melodies but resorts to some pretty basic 'core-like chugs in the bridge which are rounded out by Slayer-like note phrases which intend to make them sound more evil. This was a pretty common tactic employed by a lot of metalcore bands, for better or worse, and it just seems like the rest of Empatic's music here seems way beyond that. "Crimem Pessimum" has a mechanical, thrash-like groove in the intro which is unfortunately laid into completely with some samples that almost sound like Korn, and then a full on battery where the bass and drums just add meat to the same riff. I can pick out another dozen examples through the album, but you will sort of catch my drift from these two. Now, don't get me wrong: Ruined Landscape certainly has a lot more to it than the impression these passages leave me. Even in a few of these parts they've got a better sense of note selection than your guys playing the style, but I just felt a little inconsistency where they'd be playing this superior melodic death metal stuff (circa Hypocrisy) and then sputter into something less inspired and/or interesting.

Granted, not all of that is great, either, as in "Ambush" where it's basically paint by numbers Swedish styled melodeath like you'd hear American metalcore bands (Shadows Fall, All That Remains)  perform in the late 90s. On the other hand, they'll also transform this same sense of momentum into something more genuinely like a muscular modern thrash ("Valley of Shadows") where the riffs are way more effective with the grumbling guttural barks of the front man. All told, the production here is strong: punchy rhythm guitars, overt melodies that you don't need to strain your ears to hear, and snappy, consistent drumming and bass-lines that definitely feel like they'd help get the crowds into motion, but there's no nuance, no subtlety, and only a small selection of guitar progressions which come across as truly memorable. I guess if you can imagine a somewhat slower alternative to the Marco Aro-fronted albums by The Haunted, or another Swedish band called The Defaced, and you've got no aversion to tough guy 90s thrash and groove metal, Ruined Landscape is a solid and stubborn slab of credibility, but I would have preferred Empatic moving in a more distinctly death metal direction with more evil riffs and tremolo picking, which this does not.