Force of Darkness - Absolute Verb of Chaos and Darkness EP (2014) 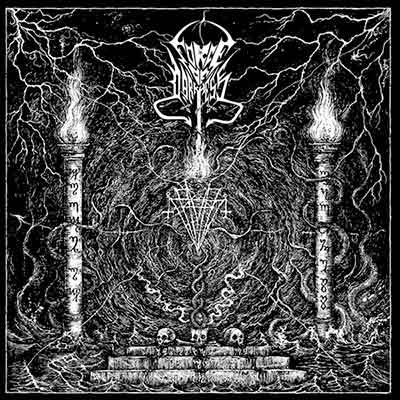 Anyone who somehow missed this Chilean band's eponymous debut from 2006 really ought to go back and check that one out. It's a frenetic and rifftastic slab of blackened thrash metal which draws its lineage from obvious but immortal sources like Bathory, but what it might lack for in originality it more than makes up for with its personality and genuine sense of nastiness. The 2nd full-length Darkness Revelation (2010) I didn't have quite as strong a reaction to, but they've now returned with a pretty relentless EP, Absolute Verb of Chaos and Darkness, which was given a vinyl release through the great Iron Pegazus Records and a CD version on Hell's Headbangers, two labels that could not be more fitting to the petulant, infernal sound these guys wring out of their instruments and imaginations.

Granted, there are a lot of really straightforward, steady blast parts here with some pretty basic and predictable tremolo picked guitars that do little more than channel the many bands that have walked this fiery path before them, but it really does have its moments, like the third track "Creations from Obscurity" with its sinister rhythm guitars and those cute little bass lines in the opening moment that set up a really strong, vicious attack, or the warlike and blinding momentum of "Abraxas Revenge" with its surges of neckbreaking thrash. The hellish vocal rasp doesn't betray the native accent nor the barking, messy influences of Quorthon, Angelripper, Mille and T.G. Warrior, and the guitars sear with an honest saturation reminiscent of earlier Teutonic thrash, only a little brighter and stronger than you'd remember from Endless Pain or Sentence of Death. Drums are lethal and fast as fuck, not exactly interesting but then they don't need to be, and the bass deserves some credit for where it occasionally perks up with a wild fill or spasm that immediately distinguishes it from the guitar, though the mix heavily favors the latter.

Force of Darkness might occasionally lapse into a one-track, black thrashing hyper-mind, but they're not above some variation, like the lurching, belligerent closer "Oceans of Black Lava", which is heavily reliant on the thundering lower end of the drum kit and some fat walls of bass guitar; or the eerie chanting and laughing over the acoustic guitars in the intro. The result is a very well rounded 20 minutes of fun while you dance amidst the shadows and flames that form the trio's creative station. It's got as excellently riffy or memorable as that last Deathhammer, or the Antichrist debut, but it's certainly got more depth to it than your average Bathory/Nifelheim knockoff, and worth a listen the next time you whip out your spikes, chains, leather, denim and inverse crucifix. But I reiterate: if you have not heard the first album, and you dig this, go back and buy that one! You can thank me later, with a big old hellthrash embrace (but no tongue, and no spikes, please).