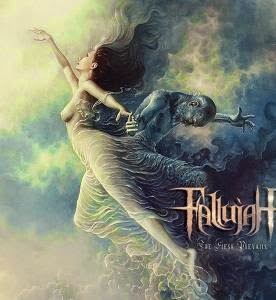 Serving as both an evolutionary leap forward for the San Franciscans, and a modern day analogue for Cynic's classic Focus, The Flesh Prevails is one of those records I sat down with expecting only a tepid reaction, but came away feeling this was the best solitary experience I've had in the technical death metal field thus far in 2014. That's not to imply that it is by any measure some straightforward, brutal exhibition of musical proficiency like a lot of Fallujah's West Coast peers, but a unique record which blends a lot of sublime New Age and jazz fusion styled guitar effects with the melodious precision and surgical incision of the aforementioned Cynic or Swedes Theory in Practice, taking it to an entirely different level. I'm also reminded a little of Lykathea Aflame's Elvenefris, not that the two discs sound much alike, but they both have that penchant for a combination of simplistic melodic, synthesized components with hostility...though where that Czech anomaly is founded more on a grind ethic, this has a more acrobatic guitar wizard feel to it, which when bound to the 80s-like ambient tones and tasteful use of ethereal female vocals, seems as ridiculous as it does refreshing.

First I must mention the drums here, which are astounding, not solely for Andrew Baird's obvious blasting ability and effortless technique, but for his willingness to flush out those fills and implement some tasty higher pitch percussion to balance off the business of the slick snare/kick patterns. It's one of those rare recordings of which I could honestly just shut off the rest of the tracks and enjoy the amount of effort and finesse put into the beats alone. But that's not to take away the rest of it, the swerving and colliding bass guitar mechanics which give it a lot of that Cynic feel, or the pinpoint rhythm guitars which shift between clinical death/thrashing patterns, hyper melodic death and the more pummeling intensity we equate with a lot of their Unique Leader peers. Certainly there is an undercurrent of post-Human Death here, much like a band such as Decrepit Birth exudes, but with that obvious added level of brutality which you would never have heard out of Chuck Schuldiner's 90s transformation. The leads are honestly one of the weaker elements to the recording, but that's saying a lot, since they're all well-constructed, technical spectacles of shred inspired by both the fusion gods of the three prior decades and the fret-lords like Steve Vai, Satriani etc who ran concurrent as a mainstream alternative to that musicians-only scene.

Where this disc really stood out for me is how it will just mete out this minimalistic sequence of melodic notes, much like Fredrik Thordendal of Meshuggah/Special Defects fame would do on records such as Destroy Erase Improve, and you get this unified disparity of throttling intensity and transcendent airiness. Intros to songs will often involve cleaner guitar passages that ramp up fluidly into the riffing barrages, and that great use of the female vocal, which in many situations would sound absolutely cheesy on an Enya level, but here just blends in with the magnitude and scope of what Fallujah are pursuing. Production is polished to a vorpal edge, but there's also a lot of depth due to the mix and multi-tracking which gives it a stereophonic, radiant, futuristic aesthetic...like you are actually listening to this panning at you from a cloud-top throne, rather than through a headphone jack. The Californians were well on their way to such a sound with this album's 2011 predecessor The Harvest Wombs, but that was not so much about this sort of progressive balance as just getting the heavy correct, and while I did enjoy that to a degree this just exceeds it on so many levels...Fallujah have written something here that I'm going to spin repeatedly through this and several subsequent years at the very least, a dynamic whirlwind of calm and storm.

If I found any component of the disc to be lacking, it might be the guttural vocal performance of Alex Hoffman, which in any other band of its scene would seem perfectly adequate, but against the wealth of ideas presented through the instrumentation does come up somewhat bland. However, through the use of reverb, panning, and occasionally layering in of a Deicide-style snarl/growl combo, even he manages to embrace the shifting currents so crucial to upgrade The Flesh Prevails from a compelling technical exhibition to something with more emotional impact. The lyrics are personal and poetic, decent with the exception of the ambient/electropop lead-in piece "Alone With You", to which the words are obvious and groan inducing, but musically I didn't have much of an issue with the tune...it will appeal to people who enjoyed Yoko Kanno and Origa's collaborations on the Ghost in the Shell: Standalone Complex anime, for instance, which I really enjoy. But I found that those are really the only two areas in which the chinks in the armor of this record are revealed.

Ultimately, the clean vocals (female and a few faint male lines) and synthy melodies will prove an instant turnoff to that same niche audience which is likely going to (i.e. already does) hate the band for its production style, deathcore roots, and emphasis on flashy musicianship anyway, but even to those folks I want to exclaim 'we already had 35 records these last two weeks which sound like Autopsy...sweet, wonderful...now how about spending 42 minutes with something else for a change?' Fallujah's full-length sophomore is not perfect, but it does instill some faith in me that a band can put the pedal to the metal of proficiency and production standards while still writing something inspired and important. No, The Flesh Prevails is not for everyone. Nothing is. But it IS an exception, an exemption from the trending now, challenging and curiously accessible in one, and I have already listened the shit out of this record, with no plans to stop anytime soon.