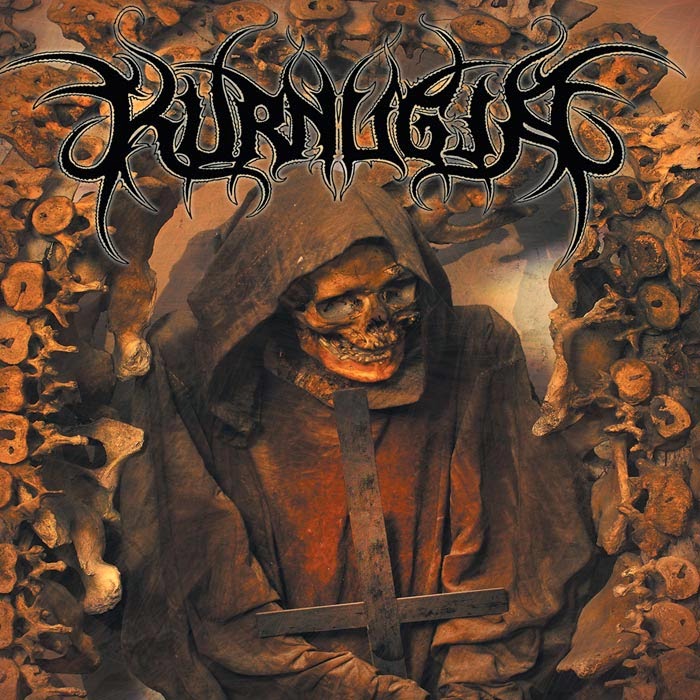 Tribulations of the Abyss was a two track promotional CD put out last year which caught the attention of Blood Harvest records, who are pressing it as a vinyl in summer 2014. The Kurnugia roster reads like the white pages of underground Ohio brutality, with former members of groups like Decrepit, Nunslaughter, From the Depths and Embalmer, not to mention the drummer of Soulless and bassist Brian Bergeron who even did a stint in a local Masshole black metal band (December Wolves). Just by cross-referencing what these guys have collectively written in and participated in from the past, you can kind of glean that whatever style the new project has settled on...it ain't gonna be pretty.

And yeah, this is stifling, mirror-cracking ugliness which ranks among the most rank and rotting old school USDM I've heard lately, what might occur if you were to supplant a Midwest beauty pageant with festering, shambling revenants bearing plague-carts. Take bands like Cianide and Autopsy as a reference point and then just sort of weave in hints of old Bolt Thrower, Benediction, and the first Death full-length Scream Bloody Gore. Roiling, primal tremolo picked guitars lines crush the tinnier snares and steady kick drums while the vocalist Duane Morris channels ungodly incarnations of dudes like Chris Reifert, though not as blood-hacking...no, this guy sounds like he's breathing out clouds of fucking flies after a dirt nap in a sarcophagus. The songs move at generally slower paces where the ravenous, raw guitar tones settle into harrowing grooves, and the fat bass lines can pump out enough blackened ichor to support them...but as with the second tune "Diseased Angels", they really show they can ramp up that pace to insert a little versatility.

Most importantly, while the guitar patterns aren't anything you haven't heard a million times if you're into this style of death metal, they're at least refreshing because this totally has a genuine production feel like it was written and recorded in 1987 and then just dug up recently, remixed to meet the suffering standards of this New Age of Old, Mouldering Death Metal. I'm about as jaded on this style as one could possibly be, receiving dozens of albums, demos and EPs each much that reach back straight for the roots, and yet Tribulations of the Abyss didn't annoy me in the slightest. It's not mandatory, perhaps, but you can just feel in the primal presentation that they were 'there', a bunch of maniacs who have been repressing these carnal, cavernous confessions for decades and have just permitted us to join them in a booth reeking of fleshy antiquity and ages-old murder.