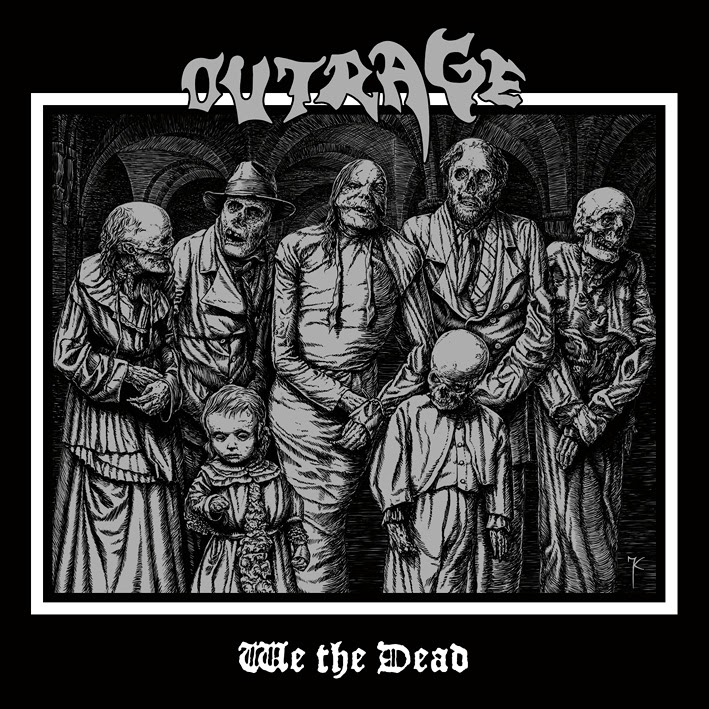 Outrage was an obscurity during the German emergence as thrash, speed and heavy metal masters in the 80s, but after nearly a 20 year silence decided to give it another go, which has turned out a lot more productive than any of the aspirations of their respective youths. Demo compilations and six full-length albums have now seen the light of day (since 2004), and We the Dead will mark the seventh, retaining the simplistic and effective cover art style of its predecessor Go to Hell (2011) and I had presumed a musical one as well. And would you know it, that's the truth, but the 4-piece has gone ahead and surpassed itself with a bloody, appreciably loyal aesthetic to anyone that has heard not only their last works but the sadistic directness of their far more popular German peers like Sodom, Kreator and Destruction.

Essentially, this is a rough & ready blackened speed/thrash metal album which recounts the older offerings of the Gods like Sentence of Death, Endless Pain and Persecution Mania, with raucous death bark vocals more akin to Angelripper than Schmier, and lots of precise machine gun riffing which isn't above the occasional transition to a classic headbanging middle pace, or something even more slow ("Be That As It May") where the bass lines can push through the wall of rhythm guitar a little better than when they're on full throttle. But overall, I think they really shine when they're picking more rapidly and resurrecting nostalgia for their countrymen; you get that same incendiary feeling you heard on the classics 30 years ago. The lead guitars are efficient, expressive and blazing, the drums tight, and the vocals have a lot of the grisly flaws that give the album that much more personality. As for riff construction, I can't say it's really all that special or unique when contrasted against their forerunners from either the Teutonic big three or the West Coast US legends, but at least they offer you quite a good range without losing anything by way of consistency.

The production is actually pretty good, though, rivaling some of those better influential recordings rather than the demo-like caustics present on a lot of 'tribute' bands. Like their peers Necronomicon, Wicca, Assassin and Accuser, Outrage prove that the German bench is just as deep as that of its international futbol team, at least if you're seeking out a more authentic nostalgia concocted by guys who were actually present when the magic unraveled. We the Dead isn't going to change the world, and it's likely to be written off pretty quickly in lieu of a million other bands... After all, most of these underground scene veterans, when reunited, are facing off for the attention of an audience which has been inundated by decades of exposure to both their more successful counterparts and all the 'retro' party bands which photocopied their creative template well enough (but were more interested in how their battle jackets looked than doing anything to expand upon the music they so love). It's a tough crowd to crack, but I promise if you're hunting for material that can give you the same visceral impact you might have once felt for Pleasure to Kill or Agent, Escalation or Agent Orange once did, Outrage and We the Dead present a reliable option, at least until something brilliant comes along.