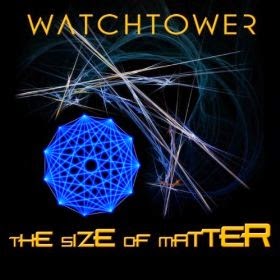 I almost forgot this thing had come out, which is most likely a progposeur crime of monstrous proportions considering how much of a proponent I've been for Watchtower's sophomore Control and Resistance this last quarter-century. Yet as I was digging through some random files in some random, abandoned folder, there it was, staring at me straight in the face, taunting me to listen through it once more, and it's not an act I regret, because if nothing else, "The Size of Matter" has me salivating for the next 'proposed' chapter in the Towerverse, the long elusive new album Mathematics, which I'm not honestly sure is even a thing anymore, but when I go to their official website, I find nothing but four years of crickets...way to keep up on that, folks.

Anyway, the song itself was something to get temporarily excited over, for with the exception that it is bolstered by a meatier mix of guitars than ever Control or the debut was, and Alan Tecchio's shriek ability somewhat more restrained through either age or wear (or both), this links pretty directly to the material they were writing before the dawn of the 90s. Schizophrenic progressive thrash written with an astounding level of musicianship, and just as much attention paid to detail. The bass and guitars here are specifically both pretty nasty, pretending as if the last few decades hadn't existed and they were continuing forth with the previous direction, only feeling even more up front and in the face. Jarzombek's drums are still quite electronic in context, a good fit for the surgical, jazzy leads that punctuate the bridge in the tune, which are easily my favorite bit in the song, but obviously the guy is such a damn brilliant timekeeper that it wouldn't make much of a difference if they were mixed and recorded with a more acoustic aesthetic in mind. Some of the fills and tempo changes are fantastic.

Tecchio does branch out into his high range with a lower, conversational harmony at one point, but I do rather enjoy the mix of his performance, it definitely carves straight into the listener and drives home the lyrics. The one area where this does fall behind Control & Resistance is that, as proficient as the musicians remain, as technical the discourse of their instruments, I did not feel as if I was being catapulted into some alien-to-me tragedy or situation like I felt back in 1989. The riffs and vocals, while impressive and consistent, aren't necessarily as memorable or on the level as the older material, but I can't lie: if they could finally get that long-anticipated post-reunion full-length out, and it was at least this quality or better, I doubt you'd hear many complaints among their fanbase...least of all from myself. As Heathen, Paradox and several other melodic tech-thrashers have already proven, the Old Guard are perfectly willing to step up into the boots of the New Guard if nobody (apart from Vektor) wants the job. Hope more something comes of this, the tune is on point.