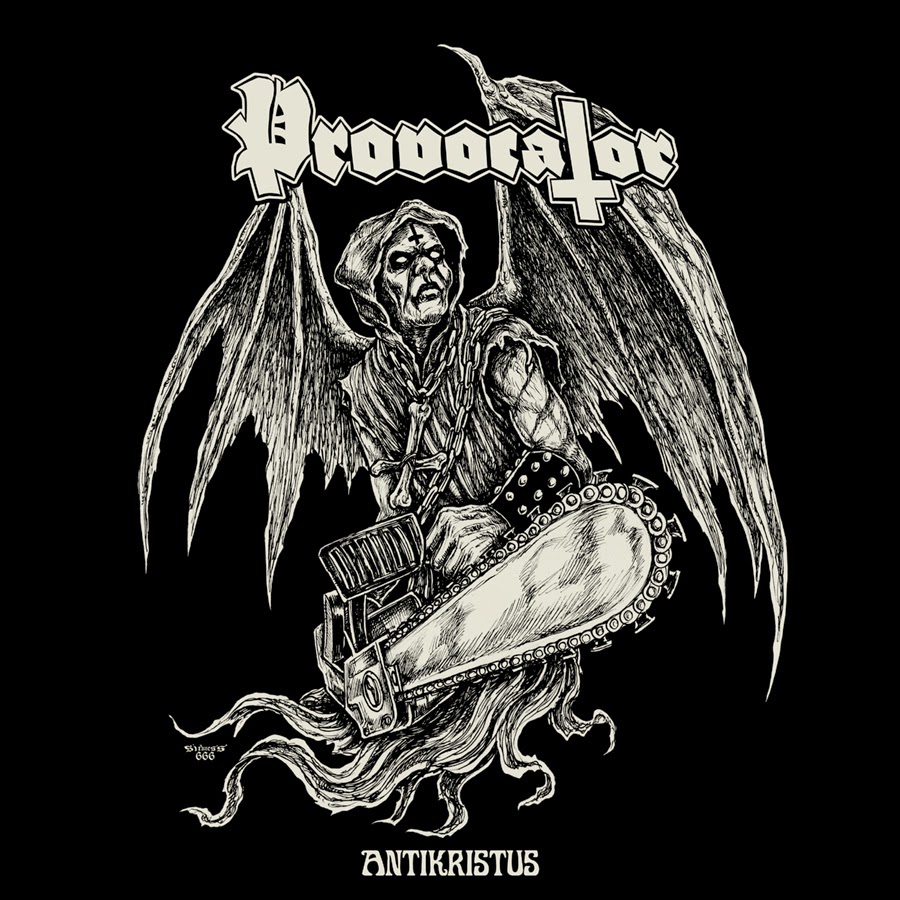 Slovenia's resident cult black metal act Bleeding Fist has almost constantly reveled in the old 90s template of the medium, producing raw and simplistic aggression the likes of which pays homage to the 1st and 2nd waves with little consideration for the very existence of much beyond them. So it's no great revelation that their vocalist Hellscream's solo project Provocator remains within the same wheelhouse. He gets a chance here to perform all instruments, and has written what equates to stock bedroom black metal, saved from (or committed to) the fire solely by his distinct, charismastic vocal presence, since there are sadly not a lot of musical ideas or individual tunes here that really stand out...

Antikristus is more or less a collision between faster, blast-based raw black metal circa Mayhem, Marduk or certain Bathory records with an overt Hellhammer influence in the slower sequences, to the point where the chord choices are basically just paraphrased from Warrior's early 80s backlog. If this were merely the inspiration, and Hellscream created some more interesting riffs from the same building materials, then it could have been a lot more compelling. That's not to say he doesn't try once in a while here, like the doomy, disjointedly melodic front half of "7 Storms of Damnation", but even those potentially memorable moments cede to a rather generic mid-speed blast beat which a chord series that is all too predictable, so much that it in of itself is barely modified from other tracks on this very album! The rhythm guitar also doesn't do much to assist the situation, sort of just roiling along the crashier tones of the drum machine while another track seems to hover at the edge of the mix like hearing mosquitoes occasionally buzz into the ear. What leads exist are messy and don't really hit for maximum dissonance or impact.

Really thought it was silly to blatantly resurrect the 'let Jesus fuck you' intro scheme, seeing that Marduk had already done it some 23 years ago and to much greater effect; perhaps Hellscream was just being referential?! There is little or no bass presence to speak of throughout the album, and also I felt like individual tracks had inconsistent mixes, giving this a sort of 'demo collection' feel about it like Bleeding Fist's last compilation Death's Old Stench (which was good stuff, don't get me wrong). But what saves Antikristus from dropping below the level of passable to outright bad is that this guy just has so much fucking fun with his vocals...growling and snarling and groveling and sometimes (if not always) completely over the top. He's like a pack of wild dogs fighting for meat-scraps, a poor man's Attila Csihar who uses his natural accent to his advantage and never settles for just boring lyrical lines...not 'technically' excellent by any stretch of the imagination, but that is exactly what makes the disc so raw and sporadic and, once in a while, genuinely cruel, even if the music itself lacks the quality that could distinguish it against the many thousands of middling demos and albums created in this very style.