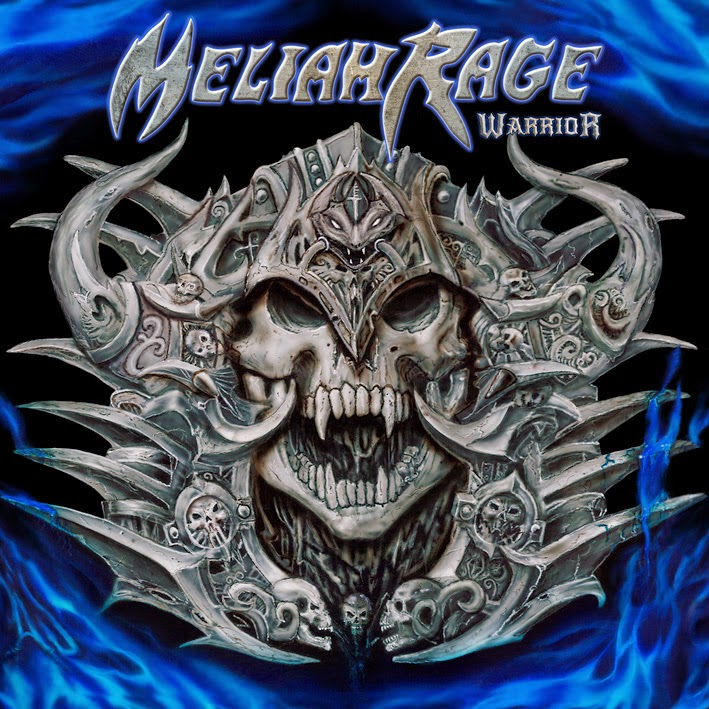 I assume at this point everyone who ever suspected Meliah Rage was just some 80s flash in the pan with a few near misses at success (via the CBS/Epic Records deal for their first two records), has now planted their moccasins firmly in their mouths; because the Boston area band has shown no signs of passing quietly into oblivion, and continues to build a solid legacy upon its great debut album. Not to mention they play a brand of what we might label 'power/thrash' that is by no means trendy, popular, or even considered relevant by generations to which metalcore, deathcore, brutal death, black metal and cheesy anthemic power metal have become the standard by which nearly everything else is judged. In fact, despite the more modern, opulent production values most bands simply can't avoid, Meliah Rage still sounds quite a lot like its earlier material, only they've gotten a fraction more varied and creative with their riffs.

The sound on Warrior, their eight full-length overall and second with Italy's Metal on Metal records, is somewhat akin to Metallica's Death Magnetic: guys in their middle years performing ball splitting, loud proto-thrash riffs rooted heavily in the NWOBHM tradition, with a bit of requisite hard rock groove and a predilection for cleaner guitar segues to balance out the harder hitting moments. It's this enormous, pounding, simplistic sort of songwriting we don't hear very often from younger bands, but at the same time melodic and emotive. Of course, even their first album was compared to that hugest metal band in history, which is perhaps partially responsible for why they never made headway with it (it didn't have the immaculate songwriting of a Ride the Lightning or Master of Puppets), but when you look at the big picture, not a lot of bands out there pursuing the style, and Meliah Rage prove here they are a match for any of them. I'm not saying the record is great, because so many of the rhythm guitar patterns fall well short of brilliance, but they at least try to pull them off in a way that is convincing, respectable and memorable enough that anyone partially/wholly stuck in the 80s mindset will not toss this one back on the slushpile without wanting a few more cracks at it.

The only major change between this and the style on the prior two outings (both of which were decent, so if you have fallen behind go check them out), is that they've brought on a new vocalist in Marc Lopes, who specializes in a cutting, sneering mid range which reminded me of the lower pitch used by legends like James Rivera, Mike Howe, David Wayne or Apocrypha's Steve Plocica. It's angry and effective, and doesn't deviate much from the Hetfield-like aesthetic introduced on the old albums by their 'classic' frontman Mike Munro. Bass lines are thick and simple, drums bold and crashing, but most people will probably be drawn most to the rhythm guitars which really evoke that sense of nostalgia and power we felt for the Big M and other bands following their footsteps. That's the area in which the Massholes are most divergent and willing to branch out, so we're treated to both the standard raging power/thrash momentum and then a lot of melodic hooks and lead structures that lend themselves to a balanced, fulfilling experience...provided you don't just write them off for not adhering to whatever sound is currently the hero of the hour, because let's be honest, Meliah Rage proudly champions not-giving-a-fuck about a sound that is heavily dated and not even popularly retro like a lot of other old speed, heavy and thrash metal.

Ultimately, Warrior, with the 1988 Kill to Survive battle-starved Native American mascot returned in an updated head shot, capitalizes on the solidarity of the two records before it while integrating a new vocalist that fits directly within the band's musical margins. It's not itself the stuff of legend like the cult classic debut, which I would heartily recommend over anything they've put out since, but this is an example of seasoned songwriting that won't disappoint the long-term fans despite the occasional clunky sounding riffs here or there, or the fact that even with 25+ years behind them, they can't even come close to escaping the shadow of the mega-band (in their prime) who they most resemble. But who in 2014 truly gives a shit about that besides nitpicking scum like myself? Here's an opportunity to bang your head before it gets scalped. If you've ever enjoyed Meliah Rage before, you might want to take it.