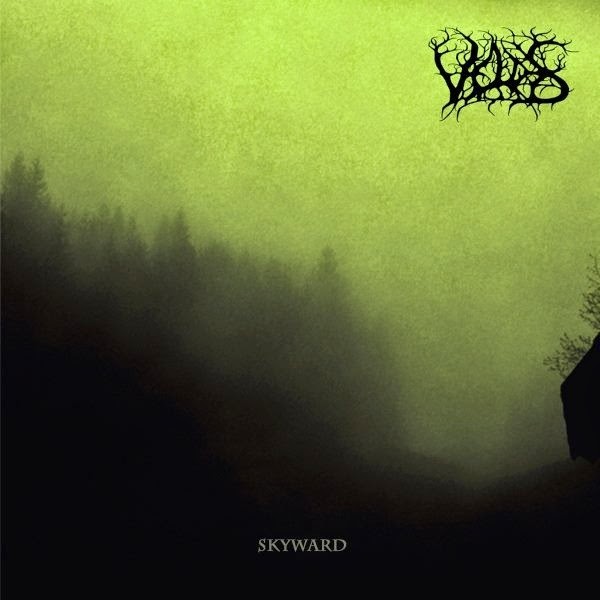 One thing I kept thinking back to as I was exploring this new Veldes EP was how Tilen Šimon (aka Isvaroth) has such a flair for cautious material held at a steady pace to provide patient emotional impact, only rarely fielding the explosions of frost tinted, blinding speed we associate with a lot of traditional black metal. Whether or not that makes Skyward partially folk metal, or black/doom I really don't need to delve into, but the result is that the music takes on this almost cinematic, sentimental form that I often equate with veteran composers like Hans Zimmer on some of his more recent material (Inception, etc) where the slow pianos hit those exact right notes, only here they are complementary to the powerful, catchy and simplistic chord patterns and driving double-kick drums...it's quite overwhelming when coupled with the hideous black metal snarls that Tilen will often sustain over entire note phrases.

Two of the four tracks here, the first ("Skyward" itself) and last ("Gone") are purely instrumental pieces using the keys which most closely manifest the principle I mentioned earlier, and both are gorgeous of their own accord, but the 9 minute "Woe Eater" also holds consistently to this theme with the pianos lightly caressing the burgeoning, melodic chords. This is also the song where he lets us know that we're not entirely in the safe zone by battering the life out of us with this concrete black metal blast sequence. "Of Rain and Moss", the other metallic track remains the slower, grandiose tempo and ties the harsher elements in with the instrumentals, though I found this was actually the most repetitive feeling tune among the four, though not at all bad if you like slower, sure footed melodies embroiled with angst and suffering. Bass lines are simple and generally tend towards the root notes of the rhythm guitar, but I can't imagine that by being busier or complex they would add much to the songs' unerring sense of sadness, like the fog slowly dissipating from the woodland scene in the cover picture.

I did find the vocal mix irksome, not because I don't enjoy Tilen's soul-baring rasps, which go sailing over the forested hillsides like blackbirds slowly plummeting from the heavens, but because there seemed to be a little too much of a buzz or distortion on the vocal track. Also I found myself wondering just how much more elegant these tunes might feel with soaring clean vocals, or a mixture of the two styles, but at least he's got one of those down pretty tight. Otherwise, I think this is slightly stronger material than last year's full-length To Drown in Bleeding Hope. The two instrumentals are beautiful, the way he weaves that style into the heavier material is also quite memorable. Riff progressions are mildly predictable, and he could probably construct melodies that come at you more from left field, but all in all, if you experience this EP in the proper climate, it conveys the sense of beautiful, maudlin desperation that Veldes no doubt set out to achieve, and those fond of slower, atmospheric black metal which doesn't shy away from piano sounds should find it appealing.