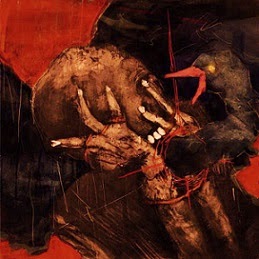 Try and imagine if you were to take the slow, sure pacing of a Gothic metal staple like Type O Negative and then garb that sense of steady tempo with rawer, drudging doom metal guitars redolent of anything from Celtic Frost to early Pyogenesis. Furthermore, capture a ritualistic vibe that ties all of this driving, dark sound into the current occult rocking hotness. Albez Duz, a German project put together by Impurus (of black metal veterans Dies Ater) is just such an unusual hybrid, and while it's not assembled with the most memorable riffing per individual songs, I think the production, the range of atmosphere and the dreary, dark ravings of co-conspirator  Alfonso Brito Lopez certainly help this to stand out from just about everything else I've heard lately... Note that I didn't say 'stand above', but certainly this was a curious enough trip that I'm like to remember the band's old Germanic, interesting name.

Organs, acoustic guitars and ethnic ambient sequences all tie into the album's conceptual matter, which I believe relates to Aztec mythology and the God of the Dead. And that's yet another reason this sophomore record is so compelling...which that subject has been broached before by a number of black or death metal bands, who would think it might hail from Germany and in this freaking style (though I believe Lopez might originally be Mexican)? That said, the metal components here are far more uniform. Corpulent bass lines ala the mid to late period Type O Negative, melancholic rhythm guitar chords somewhere between My Dying Bride and the even more funereal sect of the doom metal culture, with loads of organs and other keys which play into that aesthetic even further. But they'll deviate...like the sludgy distorted deep end that sets up "Fire Wings" or the dark ritual ambient piece "Heaven's Blind" with its creepy, repetitious mantra and horrific sound effects. Drums are typically sparse tribal percussion but pick up into solid rock beats once the guitars start slowly pounding out their dismay, and the production on the whole disc is just so loud and involving that you can't help but be swept up into this strange nightmare of opaque, slothlike aggression and anachronistic instrumentation.

To make it even more bizarre, they cover Tanita Tikaram's "Twist in My Sobriety", a tune that was a little more popular in the late 80s in Germany than here in the States. They do a good job of taking the track and personalizing it, like it was being filtered through a funeral procession, with the slow and suffering guitars and organs obfuscating the original's pop qualities, and Lopez crooning in that oh-so-deep voice circa Peter Steele, Fernando Ribeiro or Johan Edlund at their most bleak. It does hemorrhage some of the memorability of the original, but it's an eclectic choice all the same. And that's really the most distinct feature of The Coming of Mictlan. It's influences are hardly hidden among its turgid lamentations, and there are moments where I definitely drifted off to memories of some of the other acts I've listed through the review, but the way they assemble all of this into the one vision is just not something one hears every day. I do wish the guitars were a little catchier, or at the least more evil sounding, since these chord progressions often seem a little bland when beholden to the ambition of the band's concepts and how they mesh together these disparate styles into one. But the production and the unusual aesthetics win out in the end, making this worthy of attention for those seeking some Gothic doom out on the fringe.