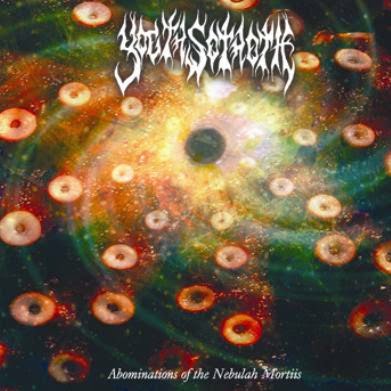 There's no question that the virulent retro death metal seed has impregnated Central and South America nearly as much as Europe and the US, but Yogth Sothoth of Colombia had the pleasure of getting their slithering appendages through the door a few years before it became a goddamn mandate, with a sort of admirable mesh of late 80s aesthetics with the earlier recordings of those lauded forebears of the East Coast US scene (Suffocation, Deicide and Immolation at the very least). So not only do we encounter a bit of the voluptuous, old school ominous tremolo picking progressions of bands like Death, Autopsy and Obituary, but also a healthy portion of the churning palm muted pre-slam we equate with a lot of the New York and later Floridian innovators who were further removing the death metal genre from its overt thrash roots. Add in the Lovecraftian theming, which is not remotely subtle on this or the Colombians' later compilation The Dark Waters Are Shaken, and you have a recipe for some success, at least if people are willing to dig back through the Sevared Records canon and spear this one up from the depths of R'lyeh.

I'm not saying it's a great record, and a lot of the material here is taken from the demo recordings of tunes that wound up on the 2009 comp, but when ingested as a whole, this is passable and ugly death metal which seems a little rare in that it doesn't just generically and genetically ape the aesthetic of one single band. Maybe a short list of 6-8 (some of which I listed above), but there is a real focus here on structure and riffing over impersonation, it's just that the results Yogth Sothoth achieve are not much different than their predecessors. Clinical picking sequences mirror old Pestilence or Death and are woven into tightly wrought, pummeling sequences circa Effigy of the Forgotten, but there is no shying away from enough variation that no two tracks on the disc sound quite the same. I really enjoyed how they used the percussion to great dramatic effect, often dropping out and back into some riffing cycles to give them a greater breath of impact, the old school way of setting up a neanderthal groove to let the crowd know it's about to happen and that they need to adjust their spines. There is not a lot of melody or memorability in the guitars on the whole, but they're flexible and concussive and you won't stop banging your head along even if that comes with an empty hope that they're going to break out into some truly brilliant riff execution...

The bass guitar gets lost a lot for me here, I can hear it hovering and swerving along but I would have loved it to pump out more from the speakers and attempt some more distinct notation to fill in the aesthetic cravings that some of the guitar riffs leave wide open. The vocals of Klisgor play out like a more muffled, guttural integration of van Drunen's grotesqueness with Frank Mullen's sense of punctuality embedded into the syllabic choices, and they also throw in some higher snarls to create that Glen Benton demonic duality. I don't love the guitar tone or really the production of this at all, but it's honest and clear enough for something lo-fi, and doesn't detract from that punchy, percussive intent captured by the rhythm guitars. As superficial a complaint as it might seem, I don't think the material really captures that dread horror aesthetic of Lovecraft to its fullest, relying almost entirely on brutality and rarely on atmosphere (apart from the "Prayer of Doom" intro), but then again not many bands who use the Mythos as lyrical inspiration really do. Yogth Sothoth WANTS me to feel the horror cosmic of its namesake, and most of the lyrics are amazing and frankly the best part of this record, but I just don't feel like the Elder Gods would champion themselves with such straightforward death metal...they'd seek out something more brain-meltingly dissonant and alien. Other bands have since incorporated a lot more of that into their material, but that doesn't stop Abominations from being a passable record (superior to the compilation)...just not a great one.