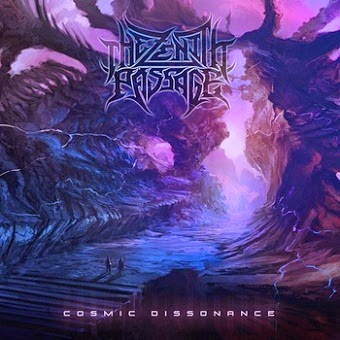 Another (late?) entrant into the Californian technical death metal sweepstakes, The Zenith Passage puts it own stamp on that divisive brand of punctual, proficient, eloquent, 'modern' aggression that is likely to drive half its projected audience to ecstasy and the other half to punch a wall repeatedly in frustration, partly because they could never play music like this and partly because it just isn't 'cool' man! NOT OLD SCHOOL. NOT AUTOPSY. MUST SUCK. Now, Cosmic Dissonance may not really live up to its namesake, since I was expecting something far more oppressive and alien judging by the beautiful cover artwork and title, but this is a slick, polished, and worthwhile outing for the most part, suffering only a few minor setbacks that will hopefully be addressed when they release something for Unique Leader, which has appropriately snapped them up.

You know the drill: variation in tempo and riff construction, fluctuated between fits of flashy speed and low end palm-muted grooves, a few of which seem frankly inane when paired up against so much else that The Zenith Passage has on offer. These guys work best when they're exploring the neo-jazzy melodies or clinical harmonic picking patterns that trace their lineage to bands like Cynic and Pestilence, and in particular they have a knack for incorporating these simpler, melodic tinges of guitar over the writhing and pummeling substrate. The guitar production is quite thin and clean, so some will consider it impotent for that reason, but if you're used to the style of bands like Obscura or the sophomore effort by The Faceless, you'll be right at home, and honestly it's a reliable means by which to ensure that the listener is going to experience all the notes on parade. The music is complex without becoming labyrinthine in execution, though there is an inequal distribution in terms of what riffs might be remembered and which obviously won't. In fact, a few of the arpeggios and 'tech' riffs in general seem quite commonplace amongst their peers, but these guys are very much capable of writing something good, they just have to shake out the temptation to launch into some dull deathcore groove or spazz out to remind us of their dexterity.

But I don't want to give the wrong impression...this is no Brain Drill, who try to cram so much into their brutech mating rituals that they work against themselves. The choices here are generally sound, enough that I enjoyed listening through the EP a number of times. The drums are off the hook, the bassist makes his present known with a few amazing fills, and the two guitarists play with such a mind numbing precision that I found myself quite absorbed in them. On the other hand, the vocals feel pretty average for this style, a bunch of taut Mullen-grunts that are occasionally layered within some deeper gutturals or snarls. Snappy enough with the syllables to fit the music like a glove, but I just feel bands of this nature would be so much better served by vocals with a more distinct pitch to them. Too few try it, they all take the safe route on which they employ the styles used by their influences in the 90s (Mullen, Lord Worm, Benton, Barnes/Corpsegrinder), and thus some of the potential personality is lost....

Otherwise, Cosmic Dissonance is very solid stuff, with only a handful of throwaway riffs and an almost limitless sea of possibilities into which they could swim from here, especially if they hold on to the astronomical lyrical themes. Love those cleaner, ambient guitar moments, and I hope they won't be afraid to delve further into that territory come full-length time, regardless of what the core meathead mosh audience desires of them. With some further refinement, they could have something on the level of the latest Fallujah disc, which was excellent, but either way this EP comes recommended to fans of albums like Cosmogenesis, Focus, Planetary Duality as well as some of their Californian peers like Arkaik, Decrepit Birth, Vale of Pnath and The Kennedy Veil.