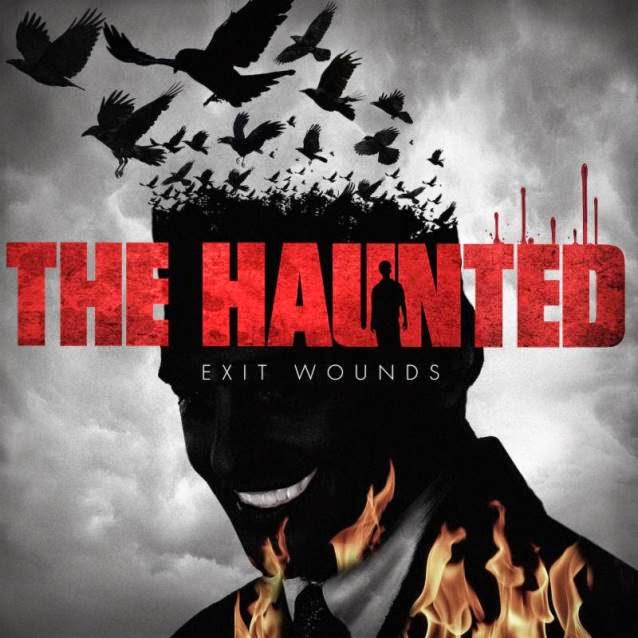 At their very best, The Haunted have always been a moderately entertaining union of the West Coast thrash of Slayer, the groove metal of the 90s and their more melodic Swedish death metal peers (whom some of them have also performed with). Coincidentally, the best I can say for Exit Wounds, their eight full-length album, is that it represents a fairly balanced fusion of the three. And yet there has always been something about this group's success which has evaded me...possibly because I've always felt that they were a distraction from Patrik Jensen's much better band Witchery, snatching away a few sweet riffs which would have been much better spent on that band, at least after their sophomore outing at which point they also provided diminishing returns. At any rate, The Haunted have a few good songs, a few dozen riffs of note scattered about their catalog, but also some truly wretched works, like their 2011 offering Unseen which was flirting with the idea that it could be a hard rock/melodic grunge album...

Well, the revolving Dolving door has swung again, and exited the band after that travesty, and so the Swedes have brought back the tireless and yet remarkably bland barker Marco Aro into the fold, to produce what for all purposes should have been the most explosive return to form one could hope for. Modern, punchy melodic death-thrash with plenty of chugathon grooves for everyone who misses the Dimebag Darrell style of riff sculpting, punctuated with eloquent enough, tasteful leads that if not inspired at least seem fluid. For those whose lives consist of endless bad tattoos, wallet chains, faux tough guy pretenses and all that other drivel that hijacked metal's subculture in the late 90s, a record like Exit Wounds must seem a godsend. Genuinely angry, riff progressions that are energetic and refined enough to impress the fuck out of anyone with a treasured Skinlab or Machine Head CD in his/her collection, and really, really wanting to be that muscle clad reinterpretation of Slayer that I sort of hinted at above...in fact, there are particular rhythm guitar components to this disc (I won't need to point them out, trust me) which really just seem like paraphrased Hanneman/King passages, not to the extent of outright plagiarism but they have never and are not now hiding this overt influence.

The bass sounds fantastic, that I have to admit, with Jonas getting to build far more of a presence than he's ever really had in his mainstay At the Gates, and the rhythm guitars clear and destructive and in some places even exciting; and of course Adrian Erlandsson can do no wrong, his finesse being such old hat at this point that the problem with any album on which he participates is almost guaranteed never to be his fault, but some of these exhausted sounding groove/palm mute riffs here couldn't have been saved by Adrian and a half dozen other world class percussionists. Probably the biggest issue with me is that I just can't stand Aro's vocals...he's pissed off sounding, but the inflection he lets loose is just so indistinct, a burlier bigger brother to Anders Sydow (ex-Darkane) only lacking that off the hinges, sneering vitriol that I so enjoyed on that guy's performances. Hailing from Facedown, I never had many expectations for Aro in this band...he's a hard worker, he looks the part (wallet chain, etc), you can't question his commitment to what must be the most exciting project he's ever partaken of, but even Dolving had a more wild and charismatic approach to the material which is just so essential in the company of giants like Tomas Lindberg. Essentially, Aro strikes me as the Rob Dukes of melodic death metal...totally on board but expendable when you can get the more interesting singer back.

I emphasize: he's not terrible here by any means, but sort of like ...Made Me Do It or One Kill Wonder, I can only imagine how much more effective the songs would have been for me if they just had someone with a more vicious personality. The lyrics on these songs are also painfully average, a long string of cliched lines you can find anywhere in 'heavy music' involving personal struggles and relationships so forth...just read through a tune like "Psychonaut" (way to defile a fantastic video game, jerks!) and you'll understand what I mean. There's one song where shouts something like 'I Don't Want You Inside Me' or similar and I almost fell over laughing. This is high school level angst wrapped up in a package of superior musicianship, but not to the extent that I can really give it a pass. At times it is indeed explosive, the production is top notch boom box fight club-approved for tribal & kanji tattoo carvings, but at the end of the day it's just no Slaughter of the Soul, no Rusted Angel, and sort of dwells with the in betweeners like most of Terror 2000's body of work or their own prior output. Is it an improvement over Unseen? Why, absolutely, but so might losing your sense of sound altogether.