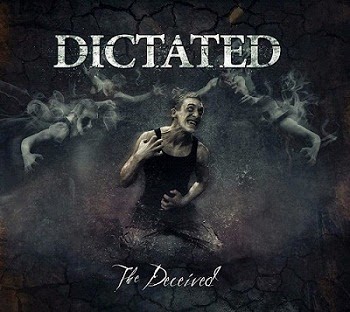 Always good to see Dutch death metal thriving, it's long been a scene I've kept my eyes on, from the early masters (Pestilence, Sinister, etc) through the considerable continuity of the 90s and beyond. Part of that is because it's in me blood, but really, it just seems like such a wonderful, balanced nation to hide such a grotesque underbelly beneath it. Perhaps the long-term effects of windmill-studded landscapes and delicious stroopwafels are more depressing and pathological than I would have predicted. Yeah, I'm being a stereotypical prick, but unfortunately the music on this Dictated sophomore record is every bit as cliche, not to the degree that they come off as some bumbling, incompetent fools, far from it...it's yet another case where absolutely no originality and very little memorable songwriting add up to a real mundane listen, strange considering they got snapped up by the fairly high profile Metal Blade Records...

It's not just the music, either. From the surface in...the bland cover artwork which looks like it's going to be a groove metal or metalcore disc, the non-logo logo which would have been better left in the trash for the cheap cost of hiring an artist (I seem to remember seeing one somewhere, it was better than this). Dictated have a sound heavily derived from the British scene, in particular Bolt Thrower, both in the slower grooves, warlike melodies and basically just how these folks structure their chord progressions. More War Master and The IVth Crusade than Realm of Chaos, but unable to conjure that epic, grim hostility of their forebears. You could also say there was a little Benediction here...not the old stuff, but the charmless mid-period where the band sort of fell behind the rest of the veterans in effectiveness. Otherwise, there might be a little bit of a bland Asphyx/Sinister imprint on the riffing and composition, but it all just feels do dry and lacking in atmosphere. Essentially Dictated feel like another 'catch up' band, striving just to attain a sound that was already passe many years ago, rather than forging into new terrain, which death metal could really use right about now, since so many of the new generation of bands are just straight derivatives of this scene or that, this guitar tone or that particular band.

Take a group like Coldworker, and then drain away all the excitement and grinding explosiveness, leaving behind their more mediocre riff selections, and I feel like you'd end up with The Deceived. Sonja Schuringa and Jessica Otten (also in Temple, who I dig more than this), are perfectly adequate guitarists, shifting between tremolo picked madness, churning chords and the corrosive melodies I mentioned above, but I just don't feel like a lot of personality exudes from their choices of riff. All patterns are wholly paraphrased from the thousands that predate them, and the album lacks the punch of wild, memorable leads or inescapable atmospheric phrasing. Henri Sattler and Michiel van der Plicht of God Dethroned take on the role of rhythm section here, and are mechanically flawless, but that doesn't really enhance the rest of the record to a noticeable degree. The vocals are a pretty stock array of broad growls and punctual barks which fall somewhere between Barney of Napalm Death and Angela ex-Arch Enemy, but once again they come across as merely functional, without any sense of sadism, torment, or character that all the best death metal frontpersons convey; nor are they specifically gargled or amusing on a humorous level.

I don't want to hate on this record too much, because it's worst crime is really just the fact that if we were drafting some sort of 'fantasy league' of death metal albums this year, The Deceived would be one of the last picks on the bench, if chosen at all. Not terrible by any means; it's just really unimaginative...inoffensive and indistinguishable from so much else, which might be enough for some listeners, but if you've got decades invested as a fan of the medium, its rather expendable, and when one takes into account how bloated the scene is to begin with, it just doesn't have that staying power...in fact, it doesn't really have much starting power. I haven't heard the self-released debut, so I can't compare this to that, but with luck they'll transform the apparent fluidity and professionalism of this effort (its strengths) into something more interesting and unique in the future. For now, I have to pass on recommending this.