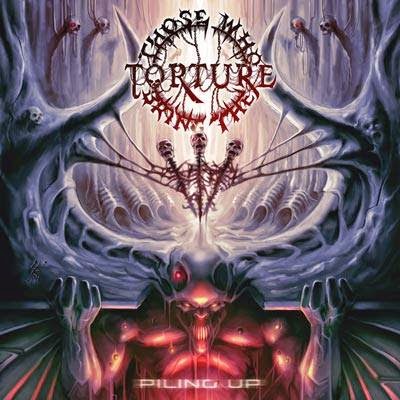 Anyone with a body of work as prolific as Rogga is bound to have some hits and misses; he's achieved some brilliant successes (like the Putrevore sophomore) and a lot of middle-of-the-road efforts, but who wouldn't when involved in so many projects? What I find pretty compelling is how his range of bands seems to reflect his own tastes/record collection that inspired him. He's got something to cover nearly every niche in the death metal genre, and Those Who Bring the Torture was presumably his paean to grinding death metal circa Napalm Death, old Carcass, Lock Up, and so forth...so I was a little perplexed when the first tune on Piling Up was more of a straight, slightly melodic take on old Swedish death circa Hypocrisy, with perhaps a few hints of other veterans like Benediction and Desultory in some of the chord patterns. This is the first of the four records by this project that I've covered, so it was not at all what I expected...at first...

Not that the disc 'rights itself' as it progresses, because there is actually a good deal of variation between tunes, some seeking out a more atmospheric pace, others a more thrash-based slew of riffs, and yet others mirroring the aesthetics of the first track. Yet there are a handful of tracks ("Through the Aeons" for example) which embody some of that 'fun' grind & roll ethic more akin to what I thought I'd be getting myself into, while "Towering Structures of the Damned" has a few fits of those calamitous old school grind-blast parts we grew up with. If we're ultimately going to try to 'pin down' this, one of Rogga's most diverse records to date, it's probably a junction between the heavier old melodic death metal (not 'melodeath', per se) and some really rootsy death/thrash, as you'll hear in the first moment of "Turrets of a Forgotten Castle". The songs aren't nearly so cosmic in nature as a lot of the Lovecraftian/horror titles might suggest, so I don't know how they measure up to that tremendous Robert Toderico artwork, but Rogga certainly focuses in on a few central ideas here and entertains with them. Riffs were a mixed bag of the derived and inspired, but cuts like "The Gateway", "Lifesucker" and "In Orbit" had me pining for the years when 'melodic' wasn't considered such a dirty word in traditional death metal, and records like Abducted and Bitterness were in regular rotation.

Production feels a little pieced together, without a terribly consistent tone throughout, so you do get the impression that Those Who Bring the Torture has undergone a reverse-metamorphosis back to the point where it's a place that Johansson is stockpiling and testing a number of ideas instead of having it all mapped out in advance, which is symptomatic of a number of his projects. That said, Piling Up (which may not be a coincidental title) is largely professional in that you can hear all the chords, the melodic tremolo picked patterns are delivered with as much impact as necessary, the bass takes on an uglier distorted subtext which contrasts well against some of the 'prettier' elements, and the beats are fluid solids which shift between simpler grooves and double bass brickwork. Rogga belches out both his usual gutturals and higher pitched snarls, a combination of which was most likely drafted forward from the older records and seems to be a standard for death/grind. Ultimately, like Putrevore is sort of a play on that old Incantation/Rottrevore style, this album most reminded me of Hypocrisy and their own fluctuations between the pioneering death metal and the more song driven, melodic direction of their mid-90s material. Perhaps not what fans of the earlier Those Who Bring the Torture output would have wanted, but certainly not bad at all.