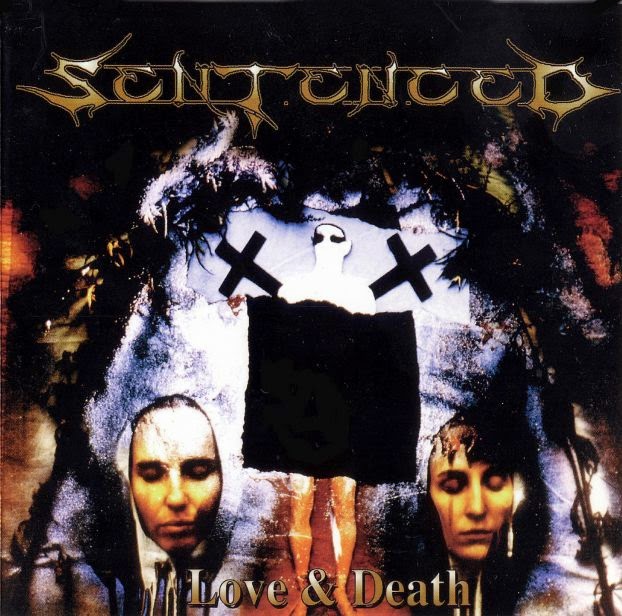 The Love & Death EP was a bittersweet moment for me, since it represented the end of Taneli Jarva's tenure in Sentenced and thus my intense interest in the band. Not because of Jarva alone, but because once they picked up their new vocalist they took the tunes a little too far into the accessible/Gothic metal range, which would not be a problem if they excelled in that area, but they really did not after a spell...Down is probably the most solid of that era and there was a scarcity to the quality beyond that point. But something about hearing Jarva's manly growls and grunts over the band's conversion into melodic, rock & roll infused death metal made Amok a jewel among my collection, an album I still break out on a regular basis, one of my favorite Finnish metal albums in history...Love & Death, if nothing more, is a sorrowful farewell to that unusual chemistry which made the band so special to begin with.

It picks up with a tune that would have felt right at home on the prior album, "The Way I Wanna Go", which I had heard before this released and thus gave me every reason to acquire it. It does take on a little more of a Gothic rock direction with the echoing clean guitars and woeful, cleaner vocals that Jarva would use a lot more in The Black League later, but once it picks up and they start nailing us with those simple, melodic chord progressions he swerves back towards that enormous, imperfect and unforgettable roar. Lots of great riffs in this one, especially the little melodies with the wah wah that reflect the earlier guitar passage, and that glorious bridge where the synthesizers are splayed out behind the core band. "Obsession" is another highlight, way more chuggy rock & roll with a nice, crashing lead/bridge, and "Dreamlands" has an amazing synth intro, but the tune most people are going to make a b-line towards here is the cover of Billy Joel's "White Wedding", which with Taneli singing sounds just as hilarious as you'd expect...I mean they play it pretty close to the belt but it's awesome, I almost want this to be my default version of the song.

Jarva is just that lovable, like a massive teddy bear from a land of cold and suicides, and his weird charm sold me on this band just as much as the fantastic riffing on North from Here and Amok. That said, the EP does feel a little uneven in places, with some of the riffs and baselines feeling a little too polished for his growls. The rhythm guitar occasionally seems too loud or too soft, but it might also be that here the Finns were experimenting more with different guitar tones in conjunction to give it a driving pop feel in places, and a more trad metal aesthetic elsewhere. The final track, "Love & Death" itself, is an amalgamation of what's gone on before it on the EP, but for some reason it doesn't stand out to my memory as much as the rest of the content. At any rate, I've never owned the version that came with The Trooper single attached, but most people these days will luck out and get this for free alongside the Amok reissue, which this material mostly pales in comparison too, but was a worthy enough successor to the extent that I was quite excited to hear what the next full length with Jarva would have sounded like...aaaand got Down and The Black League debut instead, which were hardly rock-bottom but just not as good. Love & Death: Goth-tempered, enjoyable heavy metal.