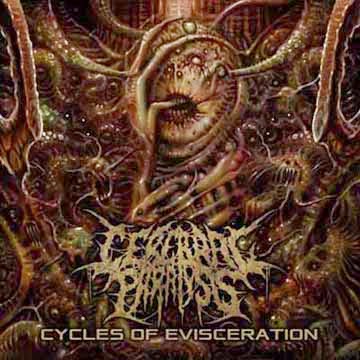 Cerebral Paralysis is the collaboration of an Italian vocal brute and a Russian multi-instrumentalist who provides everything else, and they're definitely in that territory which walks the margin between straight out meat-slam and slightly more involved brutal death metal, though the overwhelming majority of the riff progressions here are painfully simple in execution. There are points where you feel like there's this potential to outbreak towards something more technical, but the end result is something sturdy and grounded and really most concerned with the basics of what this wedding of styles might sound like if stripped down to its birthday suit. Quite often I'll encounter a disc like this and come away without much of an impression one way or the other, since the style is just so commonplace, and Cycles of Evisceration doesn't exactly stick out enough to be hammered back down (like the proverbial nail), but there is one sticking point I simply can't deny...

And that is the hilarious liberty taken by Matteo Bazzanella as he Cycles between cookie monster guttural grunts and slightly higher-pitched, silly vocal patterns that remind me of something more rapped out or Korn-like. Now you might think I'm slinging that as some sort of insult, but I'm really not, it actually takes the album up a notch in terms of entertainment value, where otherwise it would just be another pretty typical brutal death metal grist for the mill. That's not to say there aren't other areas in which this sounds pretty solid, like the thick and fibrous rhythm guitar tone that gives the nearly endless palm muted phrases and trills a little extra crunch and impact, but I don't feel like there are many riff patterns here that really stand out from one another. They're often just a few notes apart in structure and the pacing, like a lot of slam-focused material is really just a range of 'mid-paced groove' to 'slower, sick pit groove' and only occasionally will they pick up the speed, and not even that much. Standard techniques like guitar squeals at the end of a muted phrase are pretty common here and serve to round off the material with a fraction of additional charisma, but Cycles is largely a very focused, workmanlike record, like a caveman hunter bashing in the skull of the same protein source day after day...it become menial labor after awhile despite the aggression of the act.

Sounds fresh and in your face, with a functional rhythm section: drum beats pop right out while the bass is deep, punctual and taut with the root notes, but the surprises here come too seldom...like "Paralysed and Broken" which seems almost to be injected with some Southern groove metal riffs circa Down and a weird, zippy guitar at the end of that progression; or "Lurking in Slime" which features some faster paced death meal tremolo lines in between the weirdness. Problem is that left field moments like these instantly make most of the other material seem rather inhibited and non compelling by comparison, and wonder what would happen if the duo just let completely loose to achieve something absolutely batshit gonzo. As it stands, Cycles of Evisceration is certainly not a bad debut if you're into the style...the cover art is fantastic, and the music certainly makes you want to ball up your fists and club someone or something repeatedly, but having heard this stuff performed so much more effectively with stronger riffs by a number of other bands (Katalepsy, for instance), I can't say it really stuck with me for long. If you just want pulverizing palm muted grooves, though, with a disgusting vocalist that will elicit a few giggles, then give it a try.