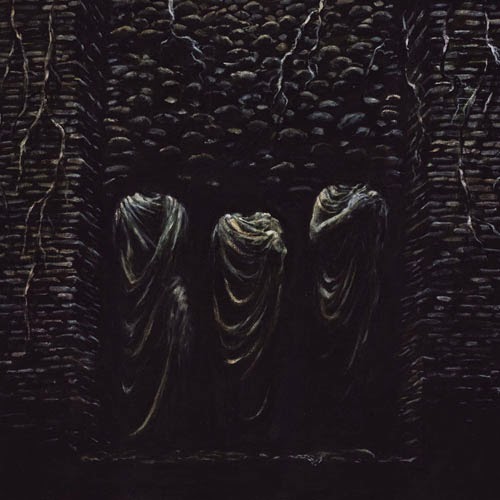 Mortuus hail from that Swedish migration of black metal towards both its roots and a slower, atmospheric interpretation. That's not to imply that every band in its niche avoids the blasting conservatism of its Scandinavian forebears, but generally groups like Shining, Ondskapt and IXXI leave more of an impression upon me when their crawling, psyche-subterranean rhythm guitars are cast about their oblique mindshares like bats inebriated off philosophers' blood, flittering and crashing off the walls and vaults of some ancient, forgotten place. I never got around to covering their first record De contemplanda Morte; De Reverencie laboribus ac Adorationis, but it was one that generated not a faint amount of praise, and while Grape of the Vine seems a more concerted, I daresay 'accessible' effort, I feel it not only lives up to the gloom of its predecessor, but surpasses it.

Tehôm simplistic, meandering riffs are the key to the experience, never bordering on technical or complex but wonderfully layered into these resilient, shining patterns of malevolence which always hover upon the precipice of suicide and dark humanism. Tunes like "Torches" fulfill the steady rock of the drum beats with these deliciously evil fills, while octave chords occasionally slide about the atmosphere to create a more melodic immersion than one would expect from staring at the stoic, beheaded statues on the cover. Some tracks like "Disobedience" are even sparser and more purely mood-driven than others, and these are where the man's massive, sustained growl fills in the void with its own brand of misery, echoing alongside the peals of feedback and stolid grooves of the bass guitar. "Tzel Maveth" is another beautiful track, one of several which lends this strange aesthetic of a post-industrial nature to the album which occasionally reminds me of band's like Treponem Pal or experimental thrash records like Kreator's Renewal or Coroner's Grin, only if they were wrapped tightly in the opaque cloak of black & roll circa Satyricon's 21st century output and crowned by Tehôm's gnarled, significant roar.

Grape of the Vine is not an immediate album with racy riff patterns and glossy textures scrapping over cheap melodic hooks, but neither is it dissonant to the level of unapproachable. It settles on the listener's shoulders like a fine, black dust of disease, steadily suffocating and offering no real avenue of escape once you've felt its lightless lure. Bass lines could be a little more adventurous, and in truth the rhythm guitar riffs don't stick 100% of the time, since a lot carry the burden of familiarity across 25 years of the genre, but on the other hand, if you're approaching the Mortuus sophomore with the right frame of mind, it WILL absorb you. Snuff out the candles, swaddle you in sulfur-tinted robes and then guide you on a sojourn through some dark places for 50 minutes, well beyond and below the warmth of the hearth-fire, the sputters and exhalations of civilization, in the cold crypts of the unliving. A very well made record.