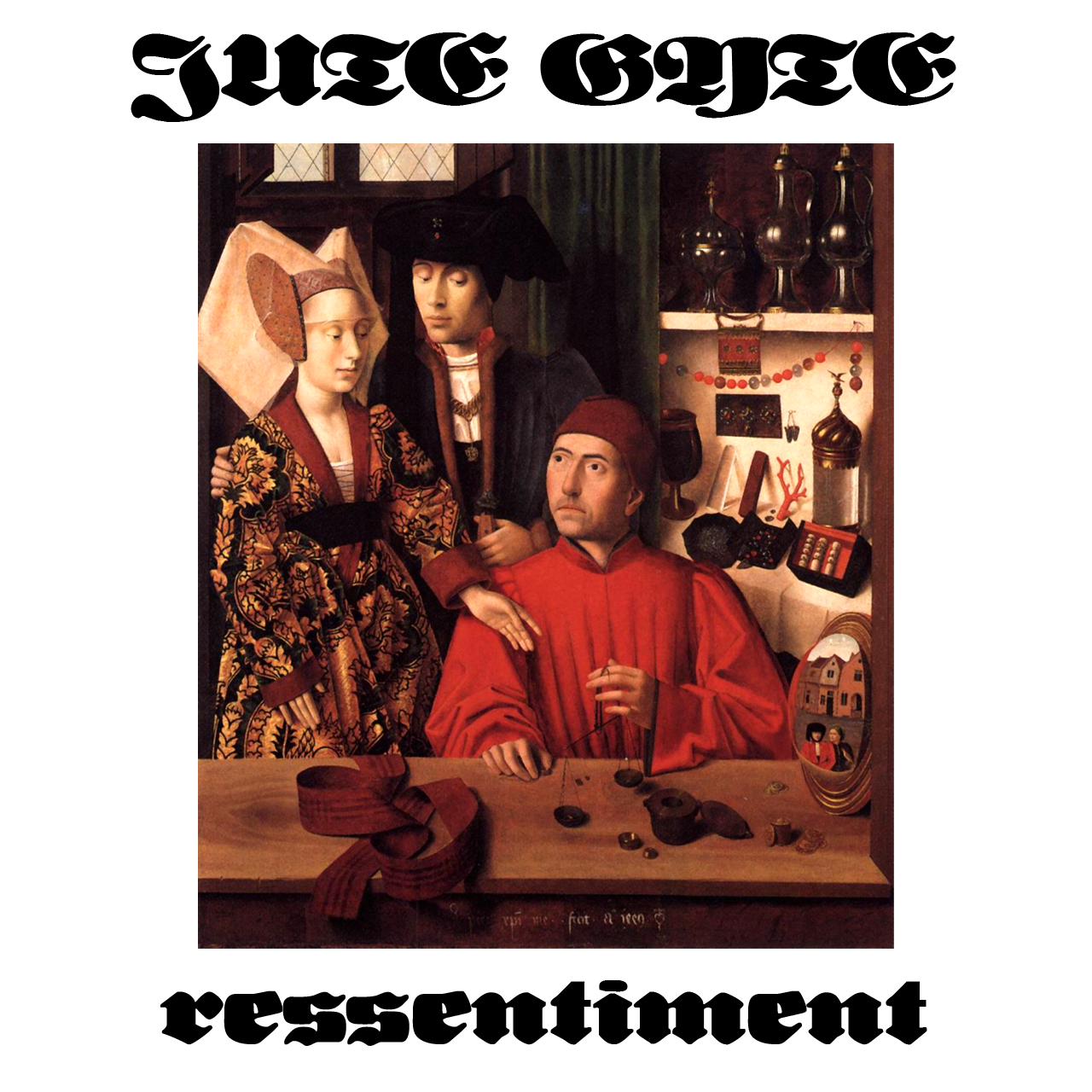 I'd like to afford myself the convenience of dubbing this or any other Jute Gyte album 'fucked up beyond recognition'; only by Adam Kalmbach's standards, Ressentiment is honestly a rather accessible experience, at least as much as anything else he's issued from the heavier half of the project's discography. That's not to say this is safe for family gatherings or airplay at a local retail outlet, but here he's reached a new height of broadening the scope of his dissonant, dramatic composition style to better intertwine the black metallic traits with a flood of caustic (but warmer toned) post-punk or post-rock experimentation which, unlike most of the inoffensive stuff out there on the market to bear that 'brand', actually lives up to the descriptor. The third in what I might incorrectly assume is a triptych of microtonal guitar driven efforts, he puts the technique to excellent use here, in the most unexpected of contexts...catchy songs.

Let me clarify that, since that term might not mean the same to myself as other folks. This is not the soothing, pop-glossed sort of catchy, but droning, oddly ebullient passages of rhythm guitars that ingrain themselves into your conscience, dowsing it in their alien landscape while Kalmbach's bass lines seem to develop themselves along busy, industrious, factory floor lines, and his grainy vocal ravings remain rooted in the black metal tradition he has gone Kafka on, peaking with the passionate howls of "Worms rob the honeycomb..." near the close of "The Grey King" (and the disc). There are other traces of that lineage here, in the form of a few hyper-blasted passages in which the rhythm guitars transform into halos of whirring hornets, but Ressentiment works its best where it remains at a moderate or slower pace, with the jangling guitars or simultaneously driving/laconic chords who seep through that strange microtonal tuning. For instance, he transforms the opener from a surge of disheveled higher pitched warp-riffing to a slower roil accented by these incredibly effective cleaner guitar lines, the whole process sounding like one tragic mistake that turns out...isn't. It's that sense of constant collision between the listener's expectations and the direction he's steering his chord and note progressions which keeps the material constantly fresh and engaging, even if it never hinges upon the consonant comfort zone most rock and metal music dwells within. It's 'art metal', but in a finer sense than just splashes of colorful paint...

Jute Gyte is more like the work of a forgotten master, hanging in the corner of the gallery where most with only a superficial interest in the museum can just ignore it. Sort of like the classics he mines to represent the face of the music. You might also think of this as an Erich Zann transcribed into our shared, non-fictional universe (I know, that's a bold assumption on my part). Every few months, Kalmbach revisits that otherworldly muse which guides him, and commits visions of the unknown and obscured straight to the earspace of those daring enough to loiter about the Rue d'Auseil and experience it. On a base level, Ressentiment is resplendent ugliness set to gnarled, visually stimulating poetry, but the twisted mind can invert it right side up to something of both abstract melancholy and fractured beauty, reactions constantly being generated for me throughout the six tracks and 56 minutes of unhinged escape. Does it go 'off the rails'? Sometimes. Was Jute Gyte ever ON the rails? Oh, no. Ressentiment will prove no surprise to those who have come across and appreciated his previous output, but it retains the project's irreverent relevance in a sea of sameness. This album isn't going to convert the crabcore elite or anyone who drowns his/her blue collar sadness in an Alestorm record, but Jute Gyte remains one of our most creative and challenging American black metal extracts.