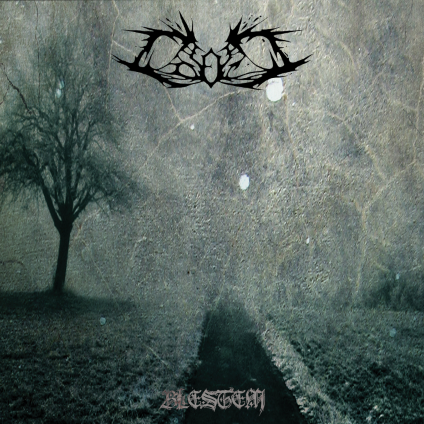 I had intended to cover Blestem last year, but it slipped my mind completely, not due to a lack of quality, but simply for the lack of having enough time in the year to write as prolifically as I'd desire. This is the solo work of one Khrud aka Klepsy aka Daniel Neagoe who also participates in a number of other bands one might have picked up, in particular the English death/doom covenant  Eye of Solitude, who also have put out some material through Kaotoxin Records, who are coincidentally re-issuing this disc so that various ignorami like myself can get off their lazy duffs and give it the once over. Or, in my case, more than that, because I enjoyed Khrud's hybrid of black and ambient metal, not for any profusion of raw or  innovative characteristics, but for the sanctity with which it approaches its desolate sound set.

One of the grayest albums I've heard in ages, it patterns blackened tropes like raucous, distant rasps, blast and double bass drum sequences and roiling tremolo picked guitars into a landscape of utter misery that finds little redemption through melodic construction. What traces might exist are keyed to a few warmer chord progressions that feel like tints of sunlight penetrating a smoggy haze, and even those are smeared into oblivion by the incursion of bleak, dry passages where simple chords ring out through the emptiness, a suffering background cry will erupt or some other element woven into the record's pervasive sense of hopelessness and isolation. Riffs are never even remotely complex or individual, used entirely as means to a painful end and not inspirational in of themselves. Nothing you'd pick out of a lineup, but effective in the context Khrud intends here. The real highlight for me were the purely sweltering ambient segments, often occupying entire tracks, and occasionally affixed with a minimalistic industrial pulse ("Intuneric") which satisfactorily supports the haunting, sewer like resonance of the protracted growls, chords or other instruments of torture used to function as an unsettling, cinematic aesthetic.

Again, it's pretty simple stuff, and just as much a low budget horror score as a distinctly 'black metal' experience, so it's not one to invest in with the expectations that you'll be able to trace it directly to the usual Scandinavian suspects. In fact it almost feels like he's mashing up bleaker ambient death and black alloy as a sample set which he can channel through something like a minimalistic early Godflesh, only without the big grooves and charismatic grunts that crafted their legend. To some the effect will be none other than that of staring repeatedly at a decaying wall, one whose entropy is overt rather than subtle, lacking in the nuances of rare lichens or curious cracks leading to secrets beneath the surface. But I think that was rather the point of Blestem, an anathema to the guitar-fed strength of its parent genre, in that it just dumbs down everything into that barren atmosphere of the psyche which responds to the same cold corridors, concrete infrastructures and vapid repetition of the urban waste surrounding us. Sufferscapes. Graystuff. Brooding, meandering grime. With those all too rare glimpses of something greater...a cathedral...a monument...which quickens the heart just in time to flatten it once more into a sulfurous paste.