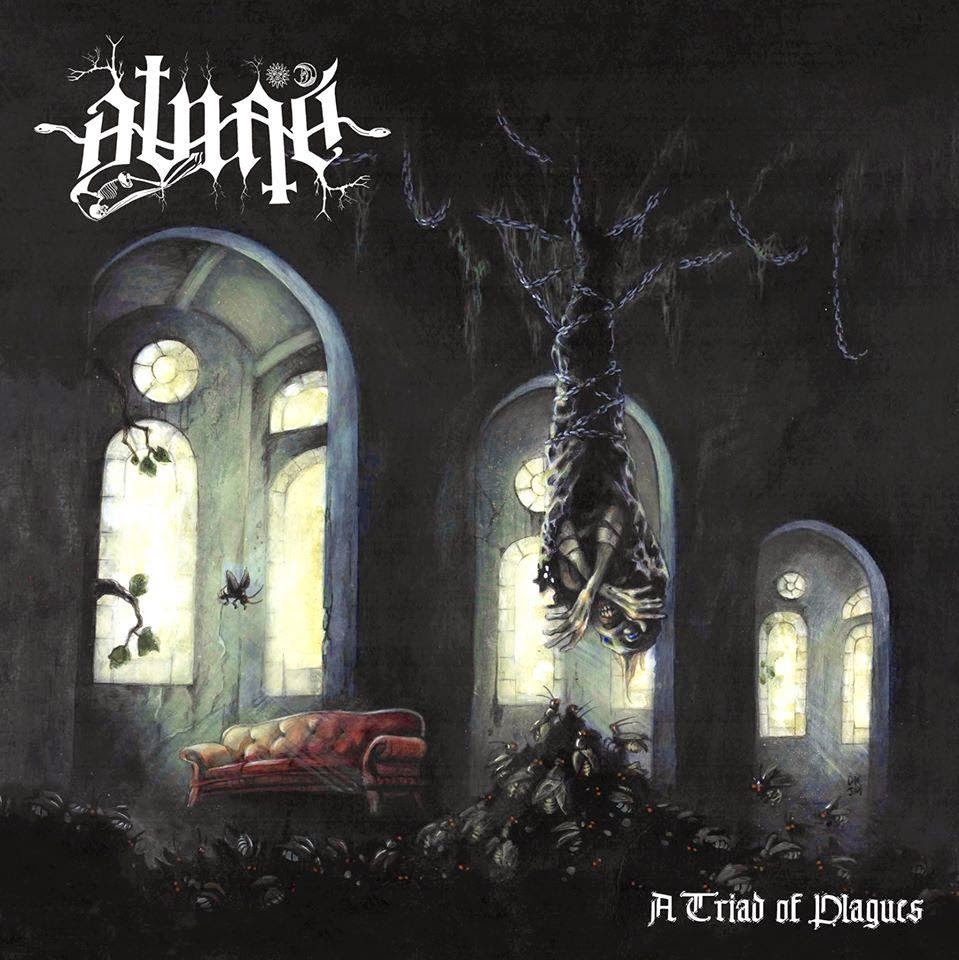 Binah's 2012 album Hallucinating in Resurrecture was a fairly outstanding effort amidst the miasma of trending caverncore. Long on suffocating, evil atmosphere and short on wasted riffing choices, it's something I'll still break out from time to time when I want to do as the natives do and wax subterranean. That said, this new EP A Triad of Plagues blows it away in approximately as long as it takes for the first track "Rupture of Silence" to begin and end. While I might have ignorantly assumed that the UK trio would channel their sound into something even more ominous and dreary, they instead have injected it with some momentum and vivacity, a hint or two of more overt melodic tendencies that contrast very well against IRG's piercing, resonant growls.

The atmospherics are still fully intact, mind you, with those roiling layers of rhythm guitar suspended just beneath the haunting synthesizers, but there is a definite sense of 'shit kicking' here that makes you wanna strap on the combat boots and pirouette straight into a delicious d-beating. Somewhere in there you've got the Swedish guitar tone embedded in the songwriting, but like other killer bands (Corrosive Carcass, Repugnant, etc) it just doesn't take center stage to the point that they ever feel like some mere copy of Left Hand Path or Dismember. There's also a Finnish influence circa bands like Convulse and Purtenance, only the first tune is a little more uptempo, and the last, "Torpid Blight of the Spirit" centers on these fiery chugging passages with loads of airy atmospheric embellishments sounding off in the distance, multi-tracked growls and snarls and just this massive nature to it which has kept me listening repeatedly. The sound effects are great, the lyrics awesome, the eerie distortion on the guitars when they're shifting into a more cautious, soundtrack-like perspective, and some really sweet drum fills to help the music feel lively and organic even though it is clearly very much fucking dead.

The only complaint I have for this is that it's so freaking short that I felt slightly unfulfilled, craving a sophomore full-length almost instantly after the first time I ran through the two and a half tunes on the 7". 12 minutes of morbid escape is sometimes just not enough, but if they can put out something of this quality while keeping in mind the variety hinted at on these songs, I feel like the proper follow up to Hallucinating will trump it without much difficulty. In the meantime, if you can find this 7" I'd advice you check it out. As jaded as I've become with the whole death metal throwback scene, with diehard blowhards lauding every single recording in the field regardless of how derivative and/or mediocre it really is, there are still a dozen or so acts in it that are churning out that beautiful festering flesh that has devoured me since the late 80s, and Binah I count proudly among them.