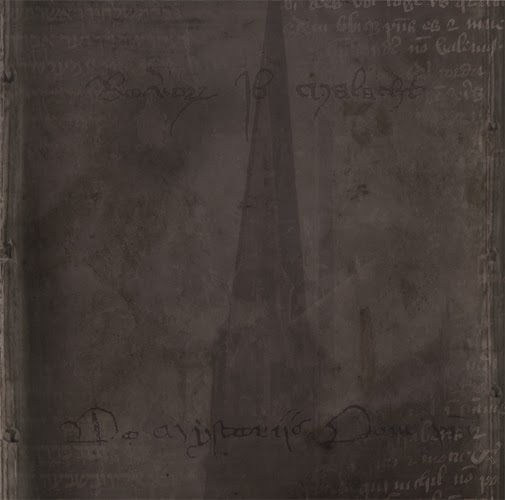 Now there's a title to turn a few heads, almost as if the duo of Reverorum ib Malacht was mocking and challenging the very foundations of the genre which spawned them. Truth be told, that is kind of what their musical vision also embodies: swaths of noisy, dissonant and distant ambient black metal which is almost entirely unfriendly to an ear that is unwilling to accept the vector from which they are approaching the timeworn tradition. Now, while the style of De Mysteriis dom Christii is unconventional, it is not precisely original, since bands like Abruptum were engaged in this crossroads of ambient, noise and atmospheric black filth decades ago; but it is one that has never ceased to engage me, when done well, and while the songs these two write might require some general 'decryption' via the ear canal, I found the sophomore album appropriately grimy, unsettling and best of all: unforgiving.

Essentially I ask the reader to imagine he or she is listening to a black metal act from the far side of some castle wall or other interposing object, while ambient passages fill in the whorls of wind or other natural embellishments. Only instead of the typical rasp vocal, some decrepit and twisted preacher is addressing a pestilence audience along to the robotic presence of a steady blast beat. You can make out subdued tones of instruments like organs being woven into the harsher tunes, while there are others like "III" which are purely roils of dark ambient textures whose effects lurk entirely in the dark, shadowed corners of the listeners' psyche. Bass lines are audible, and they do often burst into more morbid, evil sounding choirs of vocals more characteristic of the black metal genre, but in terms of structure, De Mysteriis dom Christii is written with the sole purpose of presenting an unbroken nightmare, an antithesis to the normal rock band practices of having the instruments front and foremost and letting the 'riffs' do the speaking. If anything, you could view this as 'riffless' black metal...the patterns are there, sure, but entirely buried by the choirs, synthesizers, and vile chants.

As such, it will not be for everyone...not that it's a complete deconstruction of the form but it relies far more on some of the accoutrements of the medium rather than that core instrumentation. That could be a point against it if it weren't so fucking unnerving and effective as this unwholesome screed, but here's the REAL rub...supposedly these guys became 'Roman Catholic Black Metal' a few years back, so it's entirely possible that this record is the most disgustingly wicked incursion of 'unblack' you have ever heard. But probably not fit for a Sunday Dinner with Auntie Grace. We're a long way from Stryper and Mortification here, folks, but regardless whether or not Jesus has now outfoxed the Serpent, De Mysteriis Dom Christii is a compelling experience for its masochistic, projected audience, a disc which ingests all the darkest colors of the spectrum and regurgitates them like a sermon from a crumbling cathedral sinking into a mire of utter darkness and despair. And remember this: I warned you.